Are Ethiopia and Eritrea heading back to war?-BBC News 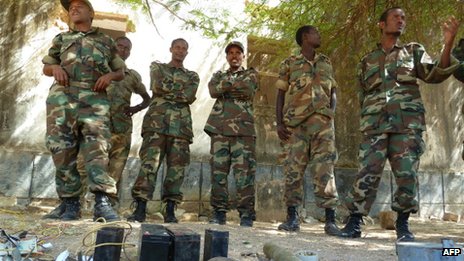 Could Ethiopia's attack on alleged rebel bases over the border inside Eritrea herald the start of a new war in the Horn of Africa?
Ethiopia says it carried out a raid on three camps belonging to a rebel group last Thursday.
A further raid was reported over the weekend, although this has been denied by Ethiopian officials.
These attacks have raised fears that this could spark another border war, similar to the conflict of 1998-2000, which left some 100,000 people dead.
So far, Eritrea appears keen to cool the situation, saying it will not strike back.
Continue reading the main story

Ali AbduEritrea's Minister of Information
Eritrea's Minister of Information Ali Abdu told the BBC that his country would not retaliate following the Ethiopian raid.
"Those who rush to aggression are those who do not know what the life of people means," Mr Ali said.
Ethiopian sources suggest Eritrea, increasingly isolated from the international community and short of funds, is in no position to respond effectively.
The fall of Colonel Gaddafi's Libya deprived the Eritrean government of one of its few allies.
In December last year, the UN Security Council imposed tougher sanctions against Eritrea after its East African neighbours accused it of continuing to provide support to Somalia's Islamist militants of al-Shabab - who Ethiopian troops are currently fighting.
This has weakened Eritrea, which once was able to confront its much larger neighbour, despite having just five million citizens, compared to the 80 million Ethiopians.
So what lay behind the Ethiopian attacks?
Indications from Addis Ababa are that the background to the raid may be more complex than simply giving Eritrea-based rebels a bloody nose.
Three camps belonging to a faction of the Afar Revolutionary Democratic Unity Front (Arduf) were attacked, in reprisal for an rebel raid on tourists in January that left five people dead.
Border troubles

Certainly there are few tears being shed by Ethiopia for the approximately 50 Afar rebels who are thought to have been killed in the attack.
But Ethiopian observers suggest that other factors may have contributed to the raid.
A number of skirmishes are reported to have taken place in border villages in recent months, with some Ethiopians allegedly abducted by Eritrean forces.
Worryingly, the last war between the two countries in May 1998 was triggered by similar skirmishes.

Since that conflict ended, some border villages have been inhabited by members of the Eritrean opposition, with Ethiopia's backing.
These are in areas awarded to Ethiopia by the Algiers Peace Agreement of June 2000 and the findings of a subsequent Boundary Commission.
Eritrea has repeatedly called on the international community to enforce the Algiers Agreement and the Boundary Commission ruling, but Ethiopia has refused to allow this, insisting that there should be further talks on the border.
This has left the location of the border in dispute, opening the way to localised disputes.
Speaking for Eritrea, Mr Ali said he was not prepared to discuss the details of the current clashes.
"This is a smokescreen," he said, "which disguises Ethiopia's non-implementation of the findings of the Boundary Commission."
"This is a continuation of Ethiopian aggression and occupation of our territory, which has gone on for the last 10 years, with the support of the United States."
Difficult to predict

But unresolved border issues may not be the only reason for the clash.
There are Ethiopian plans to develop potash mines in the remote Danakil depression, near the border with Eritrea, with the help of the Canadian firm, Allana.
This would require building a railway from the Djibouti port of Tadjoura to the mines and the redevelopment of the port itself.
Allana reported earlier this month that it had received indications of investments worth $600m from investors in the project.
Ethiopia is keen for the development to take place, but is determined to ensure that it is not attacked by Afar rebels operating in the area.
Following the end of the border war in 2000, relations between Ethiopia and Eritrea have remained tense, with both countries supporting each other's opposition movements.
On balance, most observers believe that a new war between the two countries looks unlikely, although both are ruled by mercurial leaders whose next moves have proved difficult to predict.
Ethiopia's Meles Zenawi and Eritrea's Isaias Afewerki fought together to oust Ethiopia's military ruler Haile Mariam Mengistu.
But just seven years after they achieved that goal in 1991, the pair sent their forces into battle against each other.