Eritrea is an easy target for Ethiopia | Simon Tisdall, guardian.co.uk

Eritrea is an easy target for Ethiopia 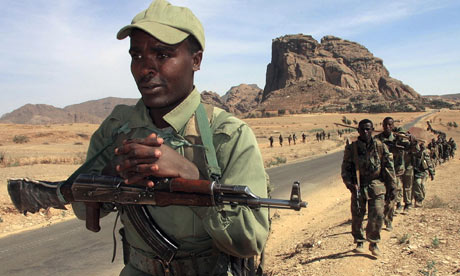 Hostility between Eritrea and Ethiopia is inflamed by a long-running boundary dispute. Photograph: Pedro Ugarte/EPA
Ethiopia's military incursion into neighbouring Eritrea, reinforced by weekend follow-up attacks, has received remarkably little international attention – and no outright condemnation, in the west at least. Britain said it was "deeply concerned" but declined to censure Addis Ababa. The US piously urged "restraint". Eritrea's demand that the UN security council punish Ethiopia has been met by deafening silence.
Such insouciance over an unprovoked assault by one sovereign state on another would be hard to imagine if, say, Argentina sent troops back to the Falklands, or Russia decided to finish the job in Georgia. But the isolated, friendless Eritrean regime of President Isaias Afwerki, the subject of UN and regional sanctions, is an easy target. And Meles Zenawi, Ethiopia's prime minister, is a key US "war on terror" ally. Hence the diplomatic silence (which Eritrea interprets as connivance).
Isaias Afwerki is a piece of work, as Americans say. Cables sent from the US embassy in Eritrea's capital, Asmara, by the then American ambassador, Ronald McMullen, and first published by WikiLeaks and the Guardian in December 2010, described the country Isaias has run with an iron fist since independence from Ethiopia in 1993 as a basket case: "Young Eritreans are fleeing their country in droves, the economy appears to be in a death spiral, Eritrea's prisons are overflowing, and the country's unhinged dictator remains cruel and defiant," McMullen wrote. "The Isaias regime is very good at controlling nearly all aspects of Eritrean society."
But it is the regime's malign meddling in its neighbours' affairs, not its ruinous domestic record, that has incurred most western opprobrium. Asmara stands accused of backing the al-Qaida-affiliated Islamist militants of al-Shabaab in Somalia, supporting anti-western or insurgent groups in Djibouti, Uganda and Sudan, and giving safe haven to Ethiopian rebels – the stated reason for last week's Ethiopian ground incursion. Asmara denies all the allegations.
An outspoken report by the UN monitoring group on Somalia and Eritrea concluded that:

"Both countries, in very different ways, serve as platforms for foreign armed groups that represent a grave and increasingly urgent threat to peace and security in the Horn and East Africa region …

Asmara's continuing relationship with al-Shabaab appears designed to legitimise and embolden the group rather than to curb its extremist orientation or encourage its participation in a political process. Moreover, Eritrean involvement in Somalia reflects a broader pattern of intelligence and special operations activity, including training, financial and logistical support to armed opposition groups in Djibouti, Ethiopia, the Sudan."

The UN report said Eritrea's behaviour should be viewed in the context of its unresolved border dispute with Ethiopia, a legacy of the 1998-2000 war between the two countries, and the resulting insecurity felt in Asmara about its giant neighbour's intentions. But it also said:

"[Eritrea's support for groups such as al-Shabaab] is also symptomatic, however, of the systematic subversion of the government of Eritrea and party institutions by a relatively small number of political, military and intelligence officials, who instead choose to conduct the affairs of state via informal and often illicit mechanisms, including people smuggling, arms trafficking, money-laundering and extortion.

"Such irregular financial practices, combined with direct financial contributions from ruling party supporters and some foreign states … help to explain how a country as poor as Eritrea manages to sustain support for a variety of armed opposition groups across the region. From 2011 onwards, Eritrea's newly emerging mining sector – especially gold – is likely to become the country's principal source of hard currency."

These damning conclusions included assertions that Eritrea plotted bomb attacks in Addis Ababa at the time of the 2011 African Union summit. Taken as a whole, they led directly to a new round of UN sanctions on Eritrea, agreed by the security council in December, that included new constraints on international mining companies.
The latest US state department human rights report makes life in Eritrea sound like hell on earth – an impression a brief visit in 2008 did little to dispel. It said:

There is no due process and persons remain in jail for years. The government severely restricted freedoms of speech, press, assembly, association, and religion. The government also limited freedom of movement and travel for all citizens."

Coincidentally or not, these findings were broadly endorsed last week bya joint statement by more than 40 countries to the UN human rights council. Ethiopia's Meles, who had already expressed support for regime change in Asmara, was doubtless emboldened by this further confirmation of Eritrea's pariah status. Last week's incursion followed swiftly.
It is hard to make a case in defence of the Eritrean regime. Recent reports suggest its al-Shabaab allies in Somalia, under pressure from Kenyan and Ethiopian forces in the south, are shifting their operations northwards into semi-autonomous Puntland while mounting terror attacks in Nairobi and seeking links with like-minded elements in Yemen. Seen this way, Eritrea is fuelling a spreading regional war.
All the same, invading other people's countries, however objectionable their behaviour, is wrong in principle and usually ill-advised in practice. While Eritrea says it does not want another war with Ethiopia, it can be expected, on past practice, to hit back covertly in unconventional and asymmetric ways. And thus the downward spiral accelerates.
• Follow Comment is free on Twitter @commentisfree
Posted by Guihon at 12:19 AM