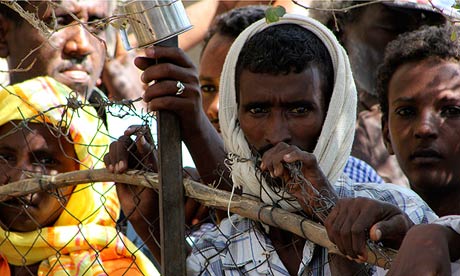 Eritrean refugees at the Shagarab camp at Kassala in Sudan. Hopeful young men are lured from the camp by the smugglers with offers of work. Photograph: Mohamed Nureldin Abdallah/Reuters
A cluster of small, concrete buildings stands in the parched landscape of the Egyptian Sinai, not far from the border with Israel. Nothing but sand and a few determined shrubs lie between them and distant jagged mountains.
This is where two Bedouin smugglers, Mustafa and Mohaned, store hostages and arms. It is the final stop on a highly organised, lucrative and brutal smuggling network that runs from the green hills of Eritrea, through Sudan's refugee camps to the Egyptian Sinai.
In Sinai, human trafficking is a successful subsidiary to the main business: smuggling arms.
Haile*, 23, was held in one of these buildings for two weeks in May, along with 60 other Eritreans all hoping to reach Israel but instead held and tortured for ransoms of up to $40,000 (£25,000). "Through a small window we could see another building that we called 'the weapons house' because a stream of men would go in empty-handed and leave with weapons," he said.
Like hundreds of thousands before him, Haile fled Eritrea for Sudan to avoid the interminable military service demanded by the regime. "Conditions were terrible. There was an outbreak of disease and many soldiers were dying. I just couldn't stand it," he said.
But after only two weeks in Shagarab refugee camp, Haile was lured by a Sudanese smuggling gang, known as Rashayda, with an offer of work. He was taken to Khartoum where he was sold to Mustafa and Mohaned, along with sacks of rocket-propelled grenades and Kalashnikov rifles. 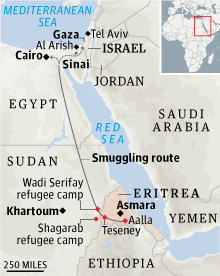 Joe, 28, made the same perilous journey in 2011. He paid smugglers several thousand dollars to take him but like Haile, he was driven in a convoy of white Toyota pickup trucks to the border with Egypt, each packed with 20 Eritrean refugees sitting on top of white flour sacks filled with Kalashnikovs. They were destined for another Sinai smuggler, Abu Mohammad.
When the convoy approached the mountains along the Sudanese-Egyptian border, each of the Eritrean men was given a gun from the stash and told to shoot if they met Egyptian soldiers.
"They know all Eritreans have been in the army; we all know how to fight," Joe said. "I wasn't scared, I felt nothing. Two people had already died from a lack of water on the way. I had given up. We are not humans to the smugglers – they treat the weapons with more respect."
Others report noticing Eritrean army markings on M14 and Kalashnikov rifles smuggled with them out of Sudan.
"I was in the army for nine years – I know the kind of weapons they use," said Thomaski Haile, an Eritrean dissident who crossed into Sinai in 2007. "One M14 in my car had Tigrinya symbols and a series of numbers on the side that belonged to the lowest rank in the Eritrean army."
Once inside the Sinai smugglers' camps, only those who can be of service to their captors are spared daily torture, including being hung upside down for hours, rape and burning with electric cables. Their screams are relayed to relatives over the phone, along with demands for money.
Woldemariame, 31, who earns a living washing dishes at a Tel Aviv restaurant, was another of those kidnapped by Abu Mohammad. He said he spent a month in Sinai, where, as a fluent Arabic speaker, he worked as a translator for the Bedouin gang and was privy to every aspect of their business.
"Abu Mohammad smuggles people from Libya and Sudan to Israel. He also receives deliveries of around 150 weapons three times a week. I saw with my own eyes Abu Mohammad pay $250 each for these weapons, mostly Russian originally. He sells them to Palestinians for more," Woldemariame said.
He described the weapon's journey, starting at Aalla, a town in Eritrea's southern hills, to a warehouse in Teseney, on the Sudanese border. From here, two high-ranking Eritrean officers drove them across the border to WadiSerifay refugee camp where they were handed over to the Rashayda, Woldemariame said.
According to Woldemariame and the UN monitoring group, one man controls this export industry: General Teklai Kifle "Manjus", commander of Eritrea's western military zone.
A UN investigator for the Eritrea and Somalia Monitoring Group, said: "A small clique of military and government officials runs the state and Manjus is one of the most influential. With activity on this scale over such a long time you have to assume the knowledge and tacit approval of other parts of the Eritrean leadership.
"Their motivation is financial, not just in terms of the personal gain of Manjus but also for the party and party officials. Particularly, given the scale, with regard to human trafficking."
Eritrea denies these charges.
The estimated 40,000 Eritreans living in Israel legally cannot be deported because of the dangers they face should they return, but are not granted refugee status. They receive no state support but it is this community that shoulders the burden of raising hundreds of thousands of dollars to save the lives of kidnapped relatives.
Eritrean refugees in Tel Aviv, many of whom have endured the horrors of the Sinai torture camps, ask why no one – not Israel, Egypt, the US nor the EU – will intervene to stop the brutal trade in human lives that is bankrupting their families, or the weapons trade they believe arms militants, including Hamas.
Former middleman Woldemariame said Abu Mohammad was able to run his criminal business openly. His base, a huge, off-white villa surrounded by a low wall, is near the UN airbase in Sinai. The arms, he said, are kept in a bamboo shack 100 metres from the house.
"The refugees he tortures can see red helicopters landing at the UN base 300 metres away," he said. "I'm sure you can see his villa from the UN. If they would just go and look, they would find hundreds of weapons. Those people must not have any brains if they don't know what's going on there."
*Full names have been withheld to protect the witnesses
Posted by Guihon at 2:23 AM