Eritrean women face threat of abuse even after they leave: report - Sudan Tribune: Plural news and views on Sudan

April 28, 2013 (KHARTOUM) - Eritrean women fleeing their country’s oppressive regime are increasingly finding themselves the repeat victim of abuse, exploitation and violence once outside their homeland, a new report by a women’s rights group has found.

Meriam Mohamed Omar (R) stands with her daughter in the village of Hagaz, some 100 km (63 miles) from Asmara, in this May 7, 2007 file photograph. (Reuters/Jack Kimball) 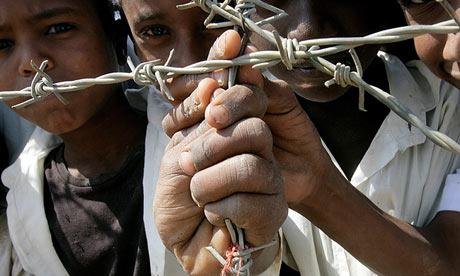 Eritrean children at Sudan's Shagarab refugee camp, which has received thousands of asylum seekers each month, largely from Eritrea. Photo: Ashraf Shazly/AFP/Getty
A military pilot sent by Eritrea to Saudi Arabia to reclaim a jet stolen by two fellow officers when they flew to seek asylum has herself defected, Saudi media has reported.
The pilot, who holds the rank of captain, told the authorities in Jizan province she did not wish to return to the east African country, a single-party state with no independent media and up to 10,000 political prisoners, Arab News reported.
The jet has been in Saudi Arabia since October, when it was diverted to the kingdom by its two officers who wanted to seek asylum, the newspaper said on Monday.
"She came to the kingdom two weeks ago to retrieve the military plane," Ali Za'le, a spokesman for Jizan governorate, was quoted as saying. "When she reached Jizan, she expressed her wish to stay here… her request is still being considered by the authorities."
Diplomats at Eritrea's embassy in Riyadh were not available to comment on the report.
Arab News said the pilot's father lived in Saudi Arabia.
Mass defections are common in Eritrea, considered one of the world's most reclusive states where dissent is dealt with harshly. Thousands of Eritreans flee the country each year, escaping unlimited conscription and poverty in the Red Sea state, aid agencies say.
Last year, 14 Eritrean footballers from the national soccer squad sought asylum in Uganda a year after 13 members of a club disappeared while participating in a regional tournament.
The UN refugee agency says more than 250,000 Eritrean refugees and nearly 15,000 asylum seekers live across the Horn of Africa.
Eritrea has a population of about 5.5 million. Earlier this year, dissident soldiers with tanks briefly took over the information ministry in Asmara, demanding that all political prisoners be freed.
Calm soon returned to the capital but Eritrean opposition activists in neighbouring Ethiopia cite growing dissent within the army over economic hardships.
Posted by Guihon at 12:40 AM 5 comments: Links to this post

JAZAN — An Eritrean female flight lieutenant, who entered the Kingdom two weeks ago to fly back a military Eritrean airplane that landed earlier in the Kingdom, told Saudi authorities that she did not want to go back to Eritrea, according Jazan Emir’s Office spokesman Ali Zala, Al-Hayat daily reported.
Zala said the lady is a staff member of the Eritrean air forces and was sent by her government to fly back the airplane which an Eritrean pilot flew to the Kingdom earlier and landed at King Abdullah Regional Airport. The pilot and his co-pilot wanted the Kingdom to give them political asylum and authorities took necessary measures at the time.
“When the lady entered Jazan, she immediately expressed her desire to seek political asylum in the Kingdom or facilitate the procedures of her moving to the country where her father lives.”
Her request is being considered by authorities, Zala adde
Posted by Guihon at 1:15 AM 4 comments: Links to this post

'via Blog this'
Posted by Guihon at 3:25 AM 5 comments: Links to this post

Allegations have surfaced this week against the government of Eritrea regarding their role in the in arming the rebels in the Central African Republic who recently overthrew Francois Bozize.

In an interview with ex-President Bozize recently ran in the media, the former CAR leader claimed that "the arms used by the Seleka rebels during their final assault on the presidential palace were purchased from Eritrea and transited through Chad with the permission of President Deby"

The Eritrean Ministry of Foreign Affairs this week issued a strong denial.

The Ministry said "the author does not provide a shred of evidence for his outlandish statement," though it notes that the article cites "Le Journal de Brazza" which similarly claimed Eritrea had "a history of arming African rebel groups, including Somalia’s Al-Shabaab".

The Ministry statement said "Eritrea has neither the political will nor the material and logistical capabilities to sell/deliver arms to rebels in CAR and/or other African rebel groups". It stresses that Eritrea does not manufacture weapons or ammunition of any kind and has not been in any position to sell and transfer arms to CAR rebels or Chad with whom it does not share contiguous territory.
(Source: DiploNews)
Posted by Guihon at 1:25 AM 5 comments: Links to this post

Meron Estefanos (www.journalisten.se )
A new grassroots movement in Eritrea that draws inspiration from the Arab revolutions in Egypt and Tunisia is poised to challenge the one-party authoritarian rule of president Isaias Afewerki, who has been in power for twenty years.
The Freedom Friday (Arbi Harnet) movement, started in November 2011 by the Eritrean diaspora, is finally gaining momentum inside the country according toMeron Estefanos, a human rights activist and presenter with the Sweden-based Radio Erena, which broadcasts in Eritrea and around the world.
In tandem with Eritrean Youth for Change (EYC) and the Eritrean Youth Solidarity for Change (EYSC), Estefanos has set up a new campaign to reverse the Arab-style call to take to the streets every Friday. Instead, it urges Eritreans to empty the streets.
"We made phone calls from diaspora to Eritrea," Estefanos told IBTimes UK."We have a phone catalogue and called random numbers every Friday, telling them to stay at home and think about problems in our country."
Follow us

Freedom Friday's coordinator in the UK Selam Kidane, also director of Release Eritrea rights group, explained that asking Eritreans to stay at home "give them an opportunity to protest without risking too much".
""Eritreans have been denied many rights and are very afraid of the government and its informants," she said. "We want to build trust among people who carry out joint protest actions."
'Go out and demonstrate'
After two years, the Freedom Friday movement has established solid roots inside Eritrea. "Now they trust us inside the country, we have our team in Eritrea that puts out posters and leaflets late at night," Estefanos said.
"The plan now that we have their trust is asking them to go out and demonstrate."
Kidane confirmed that support is rising inside the secretive Africa country. "The small team initially based in the diaspora is now an established project inside the country and everyone knows about it," she said.
What started as a call to Eritreans in the capital, Asmara, to vacate the streets every Friday may soon become a widespread youth protest akin to the April 6 movement in Egypt, which eventually helped topple president Hosni Mubarak.
"In our country we cannot have a revolution because every youth bitter about life is fleeing the country," she said. "In my radio programme I'm discussing that people shouldn't leave because it is not a solution. I believe the youths should fight in their country. The Egyptian revolution showed that anything was possible because there was an unhappy youth."
African North Korea

Eritrea's President Isaias Afwerki (Reuters)
Dubbed the North Korea of Africa, Eritrea is considered one of the continent's most opaque countries. National elections have not been held in the Horn of Africa country since it gained independence in 1993. Torture, arbitrary detention and severe restrictions on freedom of expression remain routine.
"We have a dictatorial regime, that's why people are fleeing every month," said Estefanos. "Around 3,000 people flee to Sudan every month and 1,000 to Ethiopia. We are losing the whole generation because all the youth is fleeing the country."
The mandatory military service that forces citizens to serve, on average, between the ages of 18 and 55 is one of the main causes of fleeing from the country. Advocacy group Reporters without Borders has ranked Eritrea 179thamong 179 countries on freedom of expression. Access to the country for international humanitarian and human rights organizations is almost impossible and the country has no independent media.
"Unless there is a regime change in Eritrea, things will continue like that," Estefanos said. "[Our] only target is to keep in contact with people inside the country. Now nobody doubts us anymore."
Must read: Eritrea's Forgotten Refugees Kidnapped, Tortured, Ransomed and Killed in Sinai
To report problems or to leave feedback about this article, e-mail:g.mezzofiore@ibtimes.co.uk To contact the editor, e-mail: editor@ibtimes.co.uk
Posted by Guihon at 2:10 AM 5 comments: Links to this post

Eritrean robbers get away with sixteen dollars | capitaleritrea news

Eritrean robbers get away with sixteen dollars

Chur, Switzerland: Police
Chur, Switzerland – Two young Eritreans who robbed reportedly a 29 year-old victim at knifepoint in late January got away with only 15 Swiss francs US$16. The victim fell to the ground suffering from ankle ligament damage during impact.
In a separate matter arising from a two year old hit-and-run case, one of the two Eritreans had threatened his victim with a knife getting away with 20 Swiss francs only. He was sentenced  to one year of probation by a district court and apparently did not learn his lesson from the sentencing he got two years ago.
The fact that the two Eritreans are of young age shows the increasing problems young immigrants have to adapt to their host societies due to unemployment and missing prospects on the horizon. Although, everyone is responsible for his own deeds, the Eritrean community needs to help young refugees from drifting into crime, otherwise our image will suffer, says Simon Woldeab, an Eritrean social worker.
Deportation impossible
Both Eritreans are awaiting their court case with one of them to stand trial twice in a short period of time since his last appearance in court. Swiss authorities say that repatriation is currently impossible under Swiss law, but it could be an option once the legal framework would allow to return criminal immigrants to their homeland.
Posted by Guihon at 3:04 AM 7 comments: Links to this post