The case of Eritrea, after Ablyazov, - Espresso

A dossier of the inspectors of the United Nations accuses Italian companies help the African regime to violate the embargo. And the government does not cooperate with the investigation
(18 July 2013) 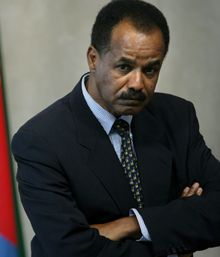 After Kazakhstan, Eritrea: another dictatorship is likely to create problems for the government Letta. A thick dossier of inspectors UN accuses our country to have contributed to the war machine of the father master Isaias Afewerki dell'Asmara. In the document examined by the "Espresso" are called in cases Italian companies for the supply of helicopters and vehicles used by the armed forces of the regime, subjected the international embargo. It comes to relations with North Korea. We describe the complaints of extortion submitted by Eritrean nationals living in Milan and ignored by the police. And above all, it is argued that our authorities did not cooperate with the United Nations. MAN TRAFFIC. According to the inspectors, the regime de l'Asmara manages to violate the embargo by importing dual-use systems, which can have a civilian job or military use. A key role in these operations is entrusted to an Italian Gianluca Battistini, a businessman who operates between Cesena, Dubai and Eritrea. Battistini is described as a businessman who operates between Cesena, Dubai and Asmara would have had appointments in numerous Italian companies, some of which are registered as suppliers of agricultural machinery. The inspectors write that their agriculture is used as a cover for importing materials for the arms. It would have been Battistini to help Colonel Weldu to obtain basic means for the Eritrean army, including a ship, and he sponsored the training in Palermo of a technical team of the regime. It was not the one mission: there have been numerous business trips to Italy Eritrean officials of the orders of Weldu 2010 onwards. CONNECTION UMBRA. attention of the detectives UN has focused then on the Officine Piccini of Perugia, they would sell equipment to the military and would maintain direct ties with President Afewerki in person. The workshops are part of a group with six thousand employees and direct operations in all continents is in charge of construction, major works and construction plant. According to the inspectors, one of the shareholders of the company has been under investigation in Switzerland for money laundering. HELICOPTERS GHOST. The same report highlights the mystery of two helicopters Italian, assembled in Eritrea by technicians of our country and used by the military until last fall. On this point, the detectives of the UN are very hard: the government of Rome did not have information on the type of aircraft and the other companies involved in the export to Eritrea. UN sources say that the discussion of the dossier before the Security Council was in danger of slipping to the pressures made ​​by Russia, Italy and partly from China. Then on July 11 the ambassador to the UN Cesare Maria Ragaglini dismissed criticism with a letter: "In February 2013 we said clearly that we have not authorized any export of arms or related material or dual-use materials. There is no evidence of any military assistance from Italy that support the allegations documented inspectors. " TAX ON IMMIGRANTS. Italy Other allegations relate to the absence of measures against extortion inflicted by consulates Eritrean emigrants. The United Nations has already reported this "measure extortion," which is used to fund the army and the one-party Eritrea. Italy had promised to take action but did nothing. The inspectors write that Eritrean nationals residing in our country are obliged to pay a fee unlawful, threatening not to renew the passport: "But those who have turned to the Italian police to report it, were sent away by telling him that" you do not can do nothing. '" And attach the receipt of one of these improper payments made ​​in Milan in March.
Posted by Guihon at 8:51 AM