ROME — These lives appear like ships at the mercy of a storm, where something that appeared as a cruel joke may actually be the salvation. These are the stories of Eritreans with Italian roots trying, sometimes with the most desperate means, to arrive from Africa in Italy.
Italy took colonial authority over Eritrea in 1890, and, according to the Italian census of 1939, the capital city of Asmara had a population of 98,000, of whom 53,000 were Italians. Among the colonizing troops and administers, some Italian men took the local women as their servants, and no small number of children were born out of wedlock. Typically, when such unintended "accidents" occurred, the women were unceremoniously abandoned. Nobody has been able to quantify how many children were born under these circumstances.
But what we know now is that Eritrea is a poor country ruled by a military dictatorship — and ever more people are trying to emigrate. This includes a group with a particular connection to Italy, such as brothers Emanuele and Angelo, who were born to a mother whose Italian father had disavowed her.
Their grandmother gave their mother to an orphanage because she would never be able to live openly in the capital with the child who was born under such circumstances.
Their mother grew up, got married and had four children, including Emanuele and Angelo, today 29 and 26 years old, respectively.
After years of mandatory service in the Eritrean military, the brothers managed to get the go-ahead to request their Italian citizenships, even though their mother's own application had been repeatedly denied. But after their new Italian passports arrived, it was followed by an ultimatum from the Eritrean government: Because they had chosen to leave the army, they also had to go within 45 days.
One sister left behind
It wasn't easy to start new lives in a completely different country, where they knew no one and nothing — not even a few words of the language. Since then it has been three long years of humiliation in public offices as they try to explain that they are, in fact, Italian, with full rights to health care, to a social security number and permanent residence. 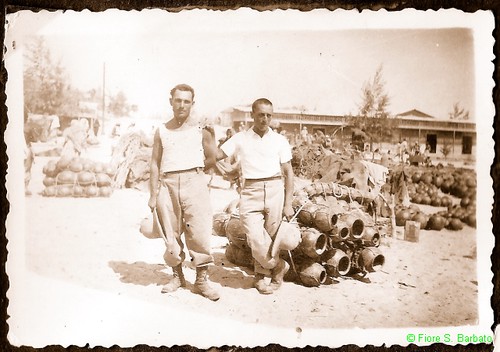 Eritrea 1936 (photo — Fiore Barbato )
They are also fighting for refugee status because they were forced to flee their country, much like other Eritreans who have landed on Italian shores after making dangerous crossings of the desert and the Mediterranean, often landing on the small island of Lampedusa.
Today, though living safely and legally in Italy, Emanuele and Angelo are still in the middle of their journey. They're no longer Eritrean, but they're not quite Italian either — as is written on their identity cards. They don't have access to public housing, or to the grants that would allow them attend university. They get by however they can, living in one of Rome's many abandoned tenements, unable to find steady work. A year ago, one of their sisters joined them, and all three worry about their last sister left in Eritrea, the only one who still hasn't managed to obtain Italian citizenship, though she too is legally entitled to it.
Emanuele and Angelo also worry about all the other children abandoned by Italy who remain in Eritrea. Nobody has officially counted them, but there are thousands of people forced to suffer violence and injustice or, in the best-case scenario, spend their lives in the army. Emanuele and Angelo are asking Italy not to look the other way.
"We don't want anything from the state, we’re somehow getting by and are surviving," says Emanuele. "But we only ask that you wake up and help all those who are of Italian descent to get the citizenship they are entitled to and get them here."
Community of Sant’Egidio, the Rome-based Catholic aid and human rights organization, has called for a revision of the norms of family reunification that, under current law, is only possible between parents and children. "The degree of kinship and possibility of private sponsorship offered by family members, relatives and non-profit organizations, associations and agencies active in the fields of migration and asylum should be extended and facilitated," says Daniela Pompei, head of Immigration Services at Sant’Egidio. "In this way, we would allow those who are sponsored to be authorized to enter the country."
Their second proposal could be even more far-reaching: the opening of European offices for asylum and immigration in the countries from which many immigrants flock. "This follows the U.S. model," continues Pompei, "and would open a channel through which refugees don’t have to put their lives at the hands of traffickers and dangerous boats. It would also allow them to seek protection in the European embassies already in their countries."
Read the full article: Italy's Abandoned Grandchildren Of African Colonization Worldcrunch - top stories from the world's best news sources Follow us: @worldcrunch on Twitter | Worldcrunch on Facebook
Posted by Guihon at 4:19 AM