(UPDATED) The government of Eritrean President Isaias Afwerki is said to have committed systematic enslavement, forcible conscription, and other abuses 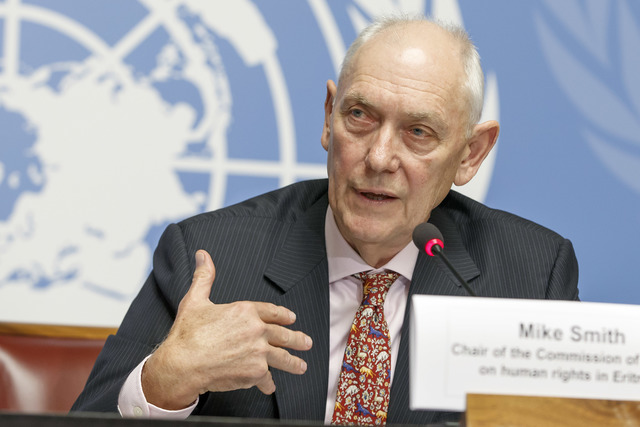 FINDINGS. Mike Smith, Chair of the UN Commission of Inquiry on human rights in Eritrea, informs the media about his second report, during a press conference at the European headquarters of the UN in Geneva, Switzerland, June 8, 2016. Photo by Salvatore Di Nolfi/EPA
GENEVA, Switzerland (UPDATED) – Eritrea's government is guilty of committing crimes against humanity since independence a quarter-century ago with up to 400,000 people "enslaved," and should face international justice, a United Nations probe said Wednesday, June 8.
The UN Commission of Inquiry (COI) on human rights said the government of President Isaias Afwerki, in power since 1991, was guilty of systematic enslavement, forcible conscription, and other abuses.
"We probably think that there are three to four hundred thousand people who have been enslaved," chief investigator Mike Smith told journalists in Geneva.
According to the UN, around 5,000 Eritreans risk their lives each month to flee the nation where forcible army conscription can last decades.
"Very few Eritreans are ever released from their military service obligations," Smith said.
Refugees from the repressive Red Sea state have in recent years made up one of the largest contingents of people risking the dangerous journey to seek a new life in Europe.
Eritrean presidential advisor Yemane Gebreab immediately rejected the COI's findings as "incredible and really laughable."
"The COI's case against Eritrea is legally indefensible," he told reporters in Geneva, accusing UN investigators of being biased and using shoddy methodology.
'Widespread abuses'
Since it was established in June 2014, the COI has interviewed more than 800 Eritrean exiles.
Following its report in June, the commission was flooded with 45,000 written responses, mostly in support of Eritrea's government.
Smith said those letters appeared to be the product of an organized campaign by Asmara.
Overall, the COI concluded that "crimes against humanity have been committed in a widespread and systematic manner in Eritrean detention facilities, military training camps, and other locations across the country over the past 25 years."
"Particular individuals, including officials at the highest levels of state, the ruling party – the People's Front for Democracy and Justice – and commanding officers bear responsibility for crimes against humanity," it said.
The UN published testimony from several alleged victims, whose names were withheld for fear of reprisal.
One man, who said he escaped from prison in 2015, told the COI that his testicles had retracted after suffering repeated beatings in detention.
He said this abuse was sparked by a March 2014 request to be released from national service on grounds that only "big bosses" were benefiting from his work, which led to his arrest.
"I was placed in shackles and detained in a cell alone for 8 months. I was repeatedly beaten and tortured," he was quoted as saying.
"Each time two people held me down and two others beat me with stakes and rubbers. They submerged my head in a deep container with dirty water. They beat me on my testicles many times...I have no testicles now, they disappeared," the witness further said.
International Criminal Court
The 1991 split between Ethiopia and Eritrea followed a 3-decade independence war, which saw Eritrean rebels battling far better-equipped Ethiopian troops backed first by Washington and then by the Soviet Union.
Smith said Isaias presided over a state of more than 6 million people with no functioning democratic institutions.
"This has created a governance and rule of law vacuum, resulting in a climate of impunity for crimes against humanity," he said.
He said there was no chance that Eritrea's judicial system could bring the perpetrators to justice through a legitimate trial and called for the perpetrators to be brought before the International Criminal Court in The Hague.
"What we are asking for is the Security Council to contemplate targeted responses" against individuals responsible for rights abuse, he said, without naming any potential suspects.
Eritrea has repeatedly denied UN investigators access to the country.
The country ranks below North Korea as the worst in the world for press freedom, according to Reporters Without Borders.
With an annual per capita gross national income of $480, Eritrea is one of the world's poorest nations, according to the World Bank. – Ben Simon, AFP / Rappler.com
Posted by Guihon at 12:21 AM