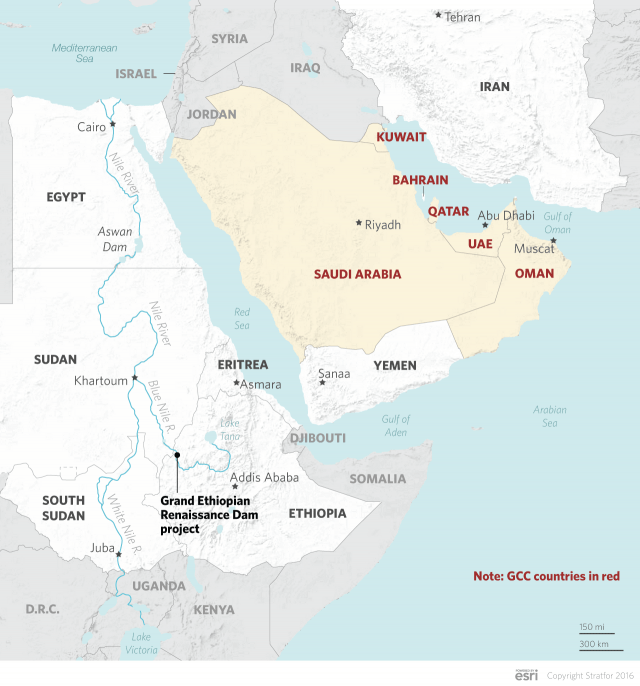 The rationale behind the GCC's interest in northeast Africa is fairly straightforward: Gulf states are compelled to improve their relationships with northeastern African countries for security purposes. Installing bases in and enhancing military ties with African countries gives Gulf states an added layer of protection against conventional military attacks. (In fact, the United Arab Emirates has already begun to develop military installations in Eritrea.) The conflict in Yemen also gives Gulf states a reason to more closely monitor Eritrea, Sudan and Somalia, which have little control over the arms and people that pass through them destined for Saudi Arabia and the United Arab Emirates, among other countries. Another concern is that if Gulf States — which are, of course, Sunni — do not reach out to these African countries, then Iran, their Shiite rival, will.
The GCC is also interested in northeastern Africa for its agriculture. From across the Red Sea, Arab states see stretches of arable land that could feed their people as well as the large workforce needed to farm that land. To that end, Saudi Arabia has prioritized agricultural investment in the region. The Saudi government has funded Sudanese agriculture projects for some time, particularly ones focused on fruits, vegetables and livestock. Saudi officials also recently visited Ethiopia specifically to discuss livestock investment. And at a May 2015 forum in Abu Dhabi, Sudanese and Emirati officials discussed nearly tripling existing Emirati investment into Sudanese projects, many of them agricultural. (Qatar, too, has recently invested heavily in Sudan's agricultural and tourism sectors.)
So far, the GCC's strategy has been relatively successful. While Sudan and Saudi Arabia have long had a healthy economic relationship, Sudan tended to patronize Iran for its security needs. But that is no longer the case. After the conflict in Yemen started, Saudi Arabia was able to convince Sudan to join its coalition. In doing so, Saudi Arabia received additional troops and, more important, disrupted Iran's smuggling operations along the Sudanese coast. Similarly, the United Arab Emirates has plucked Eritrea out of Iran's sphere of influence and has placed it firmly in its own.
Gulf states have thus created a loose alliance structure in northeastern Africa, strengthening themselves and weakening their opponents. And though there is a chance of conflict in any alliance, especially in one constituted by countries with such divergent interests, there is also the possibility, however remote, of tranquility. After all, if the GCC can convince Egypt and Ethiopia that the economic benefits of peace outweigh the causes of conflict, the alliance could create a semblance of stability. Either way, the GCC is unlikely to stray from its strategy in the region.
Posted by Guihon at 1:02 AM