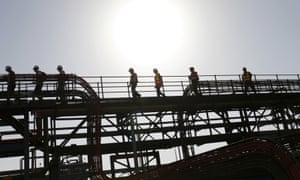 
A Canadian mining company has lost its bid to block a lawsuit accusing it of human rights abuses against miners in Eritrea after a ruling by an appeals court in British Columbia.
The decision, against Nevsun Resources, paves the way for a groundbreaking legal challenge that links the Vancouver company to allegations of modern slavery.
The case, launched in 2014 by three refugees who alleged they were forced to work at Bisha mine and endured harsh conditions and physical punishment, is one of only a handful in which foreign claimants have been granted access to Canadian courts to pursue firms based in the country over alleged human rights abuses abroad.
Filed in Canada, the lawsuit was directed at Canada’s Nevsun, which owns a controlling interest in the gold, copper and zinc mine through a chain of subsidiary corporations.
The case was catapulted into the spotlight last year when a court in the province of British Columbia ruled that it could be heard in the Canadian legal system.
Nevsun appealed the 2016 ruling, arguing that any lawsuit should be heard in Eritrea. On Tuesday, however, the British Columbia court of appeal dismissed the company’s challenge, noting the risk of corruption and unfairness in the Eritrean legal system.
Joe Fiorante of Camp Fiorante Matthews Mogerman, the lead counsel for the plaintiffs, said: “There will now be a reckoning in a Canadian court of law in which Nevsun will have to answer to the allegations that it was complicit in forced labour and grave human rights abuses at the Bisha mine.”
In affidavits filed with the court, the plaintiffs – all of whom have since left Eritrea – alleged that as conscripts in the country’s national service system, they were forced to work for government-owned construction firms subcontracted to build the mine. They claimed the conditions were inhuman and work was carried out under the constant threat of physical punishment, torture and imprisonment.

Since Nevsun owns 60% of the Bisha Mining Share Company, which owns and operates the mine (the other 40% is owned by the Eritrean government), the plaintiffs claim the Canadian company must have been aware of the reported abuses, but failed to prevent or stop them.
None of the allegations have been proven in court.
In their decision, the British Columbia appeals court judges referenced a 2016 UN inquiry into human rights in Eritrea, which found the government had committed crimes against humanity in a widespread and systematic manner. The report noted that officials in the one-party state had enslaved up to 400,000 people, with many describing how the country’s system of lifelong military service amounts to modern-day slavery.
This system is at the heart of the case against Nevsun, said Fiorante. “Our case alleges that people that were conscripted into that system were forced to work in service of building a Canadian-owned gold mine in Bisha, Eritrea,” he said.
Fiorante added that about 60 people have so far come forward with similar claims of being forced to work at the mine.
Nevsun has denied the allegations contained in the lawsuit. While the company declined to comment on the latest ruling as the matter is before the court, a Nevsun spokesperson referred to a 2015 human rights audit of the Bisha mine, noting that contractual commitments strictly prohibit the use of national service employees by Bisha’s contractors and subcontractors.
Last year the Guardian spoke with several people who alleged they had been forced to work at the mine, earning as little as a dollar a day. The work was carried out amid horrendous conditions and a climate of fear and intimidation, they claimed.
“The mine was like an open prison,” said one former security guard, speaking on condition of anonymity to protect family still in Eritrea. “They can take you and do what they want with you. I was owned by them. We were like objects for the government and for foreign companies to do with us what they wanted.”

… we have a small favour to ask. More people are reading the Guardian than ever but advertising revenues across the media are falling fast. And unlike many news organisations, we haven’t put up a paywall – we want to keep our journalism as open as we can. So you can see why we need to ask for your help. The Guardian’s independent, investigative journalism takes a lot of time, money and hard work to produce. But we do it because we believe our perspective matters – because it might well be your perspective, too.

I appreciate there not being a paywall: it is more democratic for the media to be available for all and not a commodity to be purchased by a few. I’m happy to make a contribution so others with less means still have access to information.Thomasine F-R.

If everyone who reads our reporting, who likes it, helps fund it, our future would be much more secure. For as little as £1, you can support the Guardian – and it only takes a minute. Thank you.
Posted by Guihon at 2:21 AM