Riek Machar called for peace between Eritrea and Ethiopia, and in Somalia

UNITED NATIONS, July 14 -- South Sudan was admitted to the UN on Thursday morning in New York, its new flag raised on the pole of Mauritius facing First Avenue.

In the General Assembly, US Ambassador Susan Rice on behalf of the host country quoted President Obama, that “after the darkness of war, there can be a new day of peace and progress.” Her speech did not mention the continued war in Southern Kordofan, Blue Nile and Darfur in the Sudan.

South Sudan's vice president Riek Machar in his speech spoke of these and of Darfur, and called for peace between Eritrea and Ethiopia, and in Somalia. UN Secretary General Ban Ki-moon during his trip to Juba last weekend met with Eritrea's president Isaias Afewerki, and his office issued this read out:

“The Secretary-General met with President Isaias Afewerki in Juba on 8 July 2011. The Secretary-General and President Afewerki discussed peace and security issues in the region in particular the independence of South Sudan, and they agreed to find another opportunity to discuss the role of Eritrea and the complexities of the sub-region.”

Strikingly, the UN's read out of the meeting did not even mention Ethiopia or Somalia. On July 11, Inner City Pressasked Ban's spokesman Martin Nesirky about it:

Inner City Press: the Secretary-General met with the President of Eritrea. I wanted to know if that was his first meeting with him. And also the readout didn’t seem to make any reference to the widespread allegations that Eritrea supports Al-Shabaab and is a destabilizing factor in Somalia. Was this something that was discussed, or was not in the readout, or not discussed at all?

Spokesperson Nesirky: Well, the readout speaks for itself, Matthew.

Inner City Press: Is that his first meeting with the President of Eritrea?

Spokesperson Nesirky: I’ll check, but on the other topic that you’ve mentioned, I think the readout speaks for itself.

While more than two days later this simple question had not been answered, in the meantime several diplomats at the UN told Inner City Press that what the read out speaks of is a diplomacy by Ban that is far too quiet. Even South Sudan with all the work ahead of it is talking about peace between Eritrea and Ethiopia, including in Somalia. How could the Secretary General not even bring it up?

Ban spoke at the South Sudan festivities on Thursday morning, but unlike President of the General Assembly Joseph Diess, Ban took no questions. (Nor did he on July 12, when he came to the Security Council stakeout but left without taking any questions.)

So Inner City Press went to Thursday's noon briefing, after the South Sudan flag raising and PGA Deiss' stakeout were over. Several journalists were waiting, but none of Ban's spokespeople ever appeared. Finally Inner City Press was directed to an email of 10 am that day, that “Noon Briefing canceled.”

Inner City Press immediately emailed Ban's spokesman Martin Nesirky and his deputy Farhan Haq, asking, “Could you say why there is no noon briefing today?”

A quarter of an hour later, Haq replied, “We had explained to the press via the intercom this morning: Because of the flag raising ceremony for the Republic of South Sudan just before noon, there will be no noon briefing today.”

This does not explain it: the Office of the Spokesperson has more than enough staff to cover the flag raising ceremony -- which like Deiss' stakeout was over before noon -- and the already determined admission of South Sudan to the UN is hardly the only news of the day.

So why did Ban not take questions on July 12, not hold a stakeout like President of the General Assembly Deiss on July 14, and cancel even the normal noon briefing on July 14? Watch this site.

Footnotes: Mauritius gave up its flag pole space because it happened to be right in front of the GA, Inner City Press was told. Inside the General Assembly, making an extra space for the Republic of South Sudan was said to require one of the three Observers to not have a space. Palestine and the Holy See continued to share; the EU was not in. Camera space is going to be taken for extra states under the Capital Master Plan, Inner City Press has been told. We'll be here.

UNITED NATIONS, July 13 -- As South Sudan was recommended for UN membership by the Security Council on Wednesday, there were differing views on the border fighting in Southern Kordofan and ongoing conflict in Darfur in Western Sudan.

Inner City Press asked US Permanent Representative Susan Rice about the future of Blue Nile and Southern Kordofan states, which she had mentioned in her remarks inside the Council, and about Darfur, which she had not.

Rice replied that in Southern Kordofan, “the UN forces are now by necessity having to withdraw, their ability to act and implement their prior mandate no longer pertains.”

This is consistent with the UN's responses to Inner City Pressfor two days now, that its predominantly Egyptian peacekeepers in Southern Kordofan cannot patrol or use force.

Outgoing UN peacekeeping chief Alain Le Roy, when Inner City Press asked him later on Wednesday, added that if the peacekeepers see someone being killed, they will react as humanitarians. See video here.

Sudan's Permanent Representative Daffa-Alla Elhag Ali Osman, for his part, after saying that North and South Sudan are two houses with a single extended though perhaps divorced family in them, told Inner City Press that the UNMIS mandate is over and the peacekeepers must leave. Video here.

He claimed Khartoum would never block humanitarian access, even as one of his ministers threatens to halt the operations of NGOs in South Kordofan and Darfur.

Darfur was mentioned in the Council speeches by the United Kingdom and Portugal, for example, but not by the US. Asked about this omission, Ambassador Rice said

“we are very much still focused on the crisis in Darfur. It's the subject of deep concern to the United States, to President Obama, and all in our government. We have not let up in our focus and attention, even as we have worked very hard to support the independence of South Sudan and successful implementation of the CPA. We will have ample time this month in the Council to give the attention that is necessary, and that will remain sustained attention to Darfur, as we renew the UNAMID mandate.”

Some have questioned the US urging the rebel movements in Darfur to sign a peace “agreement” that most of the groups, from the Justice and Equality Movement to the SLA faction of Abdel Wahid al Nur, have rejected. We will have more on this. 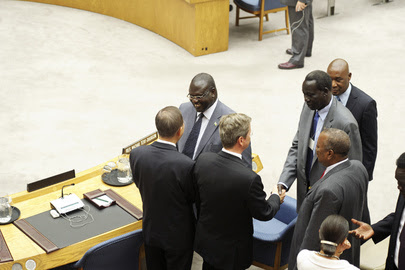 While JEM's Khalil Ibrahim remains trapped in Tripoli despite requests that the UN help to get him out, Abdel Wahid al Nur is in France, which sent to speak in the Council its new minister for French citizens overseas, the retired judo champion David Douillet, who spoke apparently only to the French media and not at the stakeout.

The Republic of South Sudan's vice president Riek Machar came out to speak, and when Inner City Press asked him about this government's relations with SPLM-North in Southern Kordofan, he replied mostly about Abyei and the requirement for a referendum there. Video here.

The next steps is the arrival of Ethiopian peacekeepers -- without a human rights monitoring mechanism -- who will begin arriving, according to Le Roy, on July 20 via El Obeid.

Given the long history, to put it mildly, between Machar and John Garang, called the father of South Sudan, Inner City Press asked Machar how he thought Garang would view the developments.

“He is happy,” Machar said, citing a Garang statement quoted in South Africa's speech to the Council. And then he and his large delegation were gone, waiting for UN General Assembly admission on July 14. We'll be there.

Here's the US Mission's transcript of Ambassador Rice's stakeout:

Inner City Press: On Sudan, you said in your statement that, "the Government of Sudan has wavered in its commitment to this June 28th agreement about South Kordofan." It seems like they've actually kind of totally broken it. They've said that they don't stand behind it. What's your understanding of where it stands? What can the UN peacekeepers that are there do even pending an agreement? And also Darfur, which I didn't see mentioned -- what does today's development in South Sudan mean for the people in Darfur? Is there a loss of focus? What are the implications for the conflict in Darfur?

Ambassador Rice: First of all, with respect to Southern Kordofan, the Government of Sudan did sign an agreement. And it would be most unfortunate if they formally reneged on that agreement. We've been concerned to see that senior leaders in Khartoum have expressed reservations and concerns about that agreement. It was an important step, and our view is that it ought to be respected and followed by an immediate agreement on a cessation of hostilities. I also mentioned in my statement the United States' deep regret that the Government of Sudan has compelled the withdrawal of UNMIS forces from the North, and this will have significant implications for the protection of civilians and humanitarian access in Southern Kordofan. As the UN forces are now by necessity having to withdraw, their ability to act and implement their prior mandate no longer pertains. And they are in the mode of withdrawal so they are not going to-unless the government of Sudan changes its mind-have the ability to do what we think is very important for them to do.

With respect to Darfur, we are very much still focused on the crisis in Darfur. It's the subject of deep concern to the United States, to President Obama, and all in our government. We have not let up in our focus and attention, even as we have worked very hard to support the independence of South Sudan and successful implementation of the CPA. We will have ample time this month in the Council to give the attention that is necessary, and that will remain sustained attention to Darfur, as we renew the UNAMID mandate. And certainly, our efforts on behalf of the people of Darfur continue.

and this October 17 debate, on Security Council and Obama and the UN.