The pilots flew to Eritrea on July 29, after notifying Israeli air traffic control at Ben Gurion Airport that they were going to pick up an injured person in Eritrea. In fact, the plane's cargo bay carried arms, including Kalashnikov rifles.

The manifest did not list the arms, but other items. The pilots were arrested after an unannounced inspection by Eritrean security forces. Israel's Ministry of Foreign Affairs was worried that the pilots had no authorization, and could have been jailed for years. Minister of Foreign Affairs Avigdor Lieberman ordered a strong diplomatic effort to obtain their release. Following the pilots release, they returned to Israel yesterday.

The Israeli authorities are investigating whether the pilots acted legally and if legal action should be taken against them.

An Ofer Shipping Group spokesman told "Yediot Ahronot" in response, "We do not comment on the security of our ships against pirates."

The pilots said that they were not arms dealers.

Afewerki: Igad should seize the moment

SECURITY MATTERS of the troubled Horn of Africa dominated debate in local, regional and international media last week, and with good reason.

Reclusive Eritrean President Isaias Afewerki, the man who fought a bloody war with neighbouring Ethiopia between 1998 and 2000, and has been accused of stoking terrorism in Somalia, made an historic visit to Kampala at the invitation of President Yoweri Museveni. Make no mistake; Museveni wields substantial influence in the region. But this is not to say Afewerki should be dismissed just because his presumed Al Shabaab protégés are beaten for now, and out of Mogadishu.

There is more to Somali issues than just the temporary defeat of an Islamist faction. Here is a divided country that has had no central government for decades and is now facing a massive famine. On its own, the highly contested Transitional Federal Government in Mogadishu has no control over any institution without the support of Amisom or the European Union.

It is for this reason that Afewerki is a central cog of the machinery that seeks to stabilise Somalia. He must now be reintegrated into the agenda of the Inter Governmental Authority on Development as a force that can sway Somali Islamists towards a national consensus.

As for Eritrea, Igad must negotiate a truce that will soothe the Security Council and stop the looming sanctions on Asmara, considering that it is ordinary Eritreans who will suffer the effect of these sanctions, not Afewerki.

This is the time to salvage regional pride and security, and give Somalis a chance to rebuild. Igad should seize the moment; Afewerki’s Kampala visit should be hailed as a step towards ending the Somali tragedy.

Photo: AP
In this Sheriff's booking photo released on August 10, 2011, by the Maricopa County Sheriff's Office, (from left to right) Asa Shani, Shullu Gorado and Luwiza Daman are shown

Three African immigrants to the U.S. have pleaded not guilty to what has been described as a fake bomb incident at a U.S. airport earlier this month.

The suspects - Luwiza Daman, Shullu Gorado and Asa Shani - who are from Eritrea entered the pleas Friday in a federal court in Arizona.

Officers checking a carry-on bag found a cell phone taped to a candy box. Prosecutors say it looked like an explosive device.

The suspects said the phone was a gift for a relative they were going to visit and that it was taped because the phone was broken.

Although no bomb was involved, the ability to move a replica of an explosive device past airport security has raised concerns about airport safety. The Federal Bureau of Investigation described the cell phone incident as a possible test of security.

The suspects remain in custody, pending a hearing next week for two of them. A judge set their trial for October 4. Each suspect faces up to five years in prison and a $250,000 fine if convicted.

Eritrea Magnitude 4.6 - NEAR THE COAST


Magnitude 4.6 - NEAR THE COAST OF ERITREA

Eritrea's President Isaias Afewerki is visiting Uganda in an attempt to boost peace in the Horn of Africa, a Ugandan presidential statement has said.

Eritrea - which is under a UN arms embargo - strongly denies the allegation.

It wants to rebuild ties with neighbouring states, analysts say.

Al-Shabab - which is linked to al-Qaeda - controls large swathes of south and central Somalia - including two large regions worst affected by a famine.

Earlier this month, it said its forces were making a tactical retreat from the capital, Mogadishu.

"Eritreans pride themselves on their rugged independence from the world, but I think there is a realisation this has reached dangerous levels”

"There are serious allegations that Eritrea is supporting al-Shabab in destabilising the Horn of Africa and so we will be hoping to hear responses to those issues," the permanent secretary at Uganda's foreign ministry, James Mugume, told the AFP news agency.

A UN monitoring report released last month accused Eritrea of funding and arming al-Shabab - an allegation it rejected as propaganda aimed at discrediting it in the region.

Earlier this month Eritrea applied to rejoin the regional bloc, the Inter-Governmental Authority on Development (Igad).

It pulled out of Igad in 2007 after the body - made up of Kenya, Uganda, Djibouti, Ethiopia, Sudan and Somalia - supported Ethiopia's military intervention to back the weak government in Somalia.

"Eritreans pride themselves on their rugged independence from the world, but I think there is a realisation this has reached dangerous levels. They are now regarded as a pariah state," Ms Wrong told the BBC's Network Africa programme. 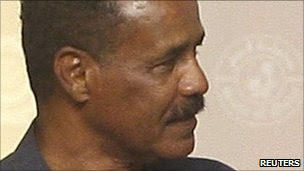 "I suspect this is Eritrea reaching out to neighbours to say: 'We don't want to be completely on our own.'"

Eritrea gained independence from Ethiopia in 1993, but the two countries soon fell out and fought a war in 1998 over their disputed border.

Eritrea accuses the West of not putting sufficient pressure on Ethiopia, an ally of the US, to respect an international commission's finding that it should withdraw from the town of Badme, which sparked the war.

Eritrea has also cut links with international aid agencies and denies UN reports that it is suffering from the drought which has hit East Africa.

For many, initial production at a mine is synonymous with headaches and missed estimates, but not so for Nevsun Resources at its Bisha mine.

For a first-time producer, it's remarkable how smoothly Nevsun Resources' (TSX: NSU) ramp-up and transition to fulltime mining have unrolled.

That was readily apparent from Nevsun's second quarter results, its first at full-bore commercial production.

Not surprisingly, with gold prices in the stratosphere and low cash costs, Nevsun generated strong cash flow. Net income was $61 million on $135 million in revenues.

If there was anything left to quibble about it was the question of how much ENAMCO, Eritrea's state miner, would pay for its 30 percent stake in the Bisha mine. (In total it owns a 40 percent stake, as the state miner gets an automatic 10 percent free carried interest in mining projects.) That was a question Nevsun and ENAMCO agreed years ago to answer once the mine was in full swing.

A decision was to come by June 30, but when that deadline came Nevsun said the pricing was still under discussion as the two looked over independent assessments of the mine value. More than a month has past since then and there was no word on progress in the quarterly update.

But Cliff Davis, Nevsun President and CEO, appeared undisturbed by the delay. In a recent email to Mineweb, Davis said that while Nevsun couldn't talk about the matter in detail, "we are comfortable with the process." He also noted the delayed pricing of the 30 percent stake had no impact on operations.

He added, "However, naturally we would prefer to have had this finalized and announced a while back."

In the end, the question comes down to how much of the cash flow from the Bisha mine Nevsun will get to keep, as ENAMCO can pay for its 30 percent share of Bisha through those proceeds.

And for the time that cash flow looks like it will remain strong. Nevsun is fortunate to be hitting its stride as gold prices reach new heights and to be mining an open pit deposit unusually rich in near surface gold.