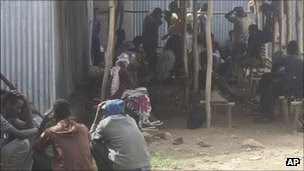 The drought and famine that is devastating the Horn of Africa is affecting more than 12 million people.
Yet one country in the region, Eritrea, says it has escaped the crisis, reaping a bumper harvest earlier this year.
But evidence is now mounting that the real situation in the secretive country may be rather different, with up to two in three Eritreans going hungry.
In the last decade Eritrea has become one of the world's most closed nations with no free press and no opposition.
So its been difficult to verify the Eritrean government's claims that the population has the food it needs.
But it has now been possible to piece together an alternative picture from a variety of sources.
There is an increasing trend of acute malnutrition in children under five in many areas.
Continue reading the main story

Susan RiceUS Ambassador to the UN
Satellite imagery from weather monitoring group the Famine Early Warning System shows below average rainfall from June to September.
This is the main rainy season for Eritrea and comes after years of severe drought in consecutive years.
The human impact is to be found in northern Ethiopia.
Emaciated Eritreans are crossing the heavily militarised border at the rate of 900 a month, according to journalists in the region.
They tell tales of crops that have failed and homes without food.
The American ambassador to the United Nations, Susan Rice, recently described Eritrea as a black hole in terms of independent information.
The Eritrean people "most likely are suffering the very same food shortages that we're seeing throughout the region (and) are being left to starve because there is not access, there's a clear-cut denial of access by the government of Eritrea of food and other humanitarian support for its people," Ms Rice said.
Most UN agencies have been refused access to Eritrea and most aid agencies have been expelled.
Even accredited ambassadors have the greatest difficulty in moving freely about the country, to assess the seriousness of the situation.