At UN, Push for Eritrea Sanctions Without Hearing President, "US & 14 Dwarfs"

UNITED NATIONS, November 29 -- Pushing for a quick vote on additional sanctions on Eritrea, Gabon late Tuesday with the support of the United States put a draft Security Council resolution "into blue" and demanded a vote on Wednesday, Inner City Press learned on Tuesday night.

Another African Council member expressed surprise and opposition, telling Inner City Press that "if it only went into blue at 5:30, then they sure couldn't vote until 6 p.m. on Wednesday." Other Council members are opposed to that timing.

But it has become a showdown, with the US claiming the support of two of the Council's three African members as well as IGAD, and virtually daring other Council members to put up a fight.

But the US put on a block -- Susan Rice told Inner City Press why, click here -- and no other member has "dared" call for a procedural vote.

"We all have our priorities," one member told Inner City Press. Another Permanent Representative is known to refer to the Council as "Blanche Neige et les quatorze nains" Disney style. 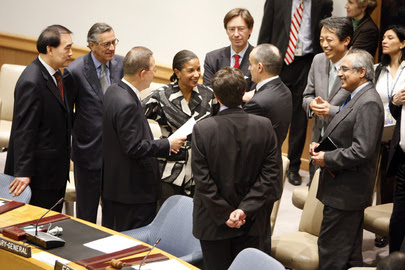 The resolution would urge all UN members for "increased vigilance” on any financing that could assist destabilizing activities and against Eritrea's mining sector.

Why this sudden timing? A well placed source tells Inner City Press that the US would prefer not to deal on this with Russia, which takes over the Council presidency on Thursday. So the US tries to push it through under Portugal. Some Working Methods - click here for more on that, and watch this site.