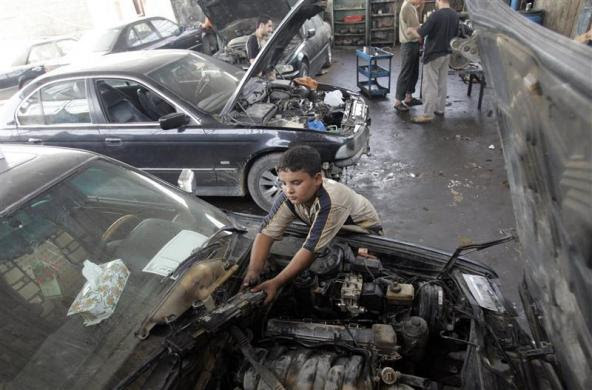 Saif, a 12-year-old who has left school, works at a garage in Baghdad July 19, 2009. Saif earns about $20 a week and is a breadwinner of his family. Photo by Saad Shalash / Reuters

This story was produced by New America Media and The San Francisco Public Press.

On the 900-mile trek of mostly desert that stretches between Eritrea and Egypt, hunting for humans has become routine.

Eritrean refugees who have fled their homeland fall prey to Bedouin or Egyptian traffickers. The refugees are held for ransom. Those with relatives abroad who can pay for their release might survive. Those who do not are often killed. The United Nations confirms that some are harvested for their organs — their livers and kidneys sold on the black market — while others, the young and able, are sold off. One survivor told the U.N., “People catch us, sell us like goats.”

Slavery is alive and well in the 21st century. There are more people enslaved today than at any other time in history. The U.S. State Department says that estimates of those enslaved through human trafficking ranges from 4 million to 27 million.

Human trafficking is the fastest-growing criminal business in the world, according to the State Department. It ranks only second to drug trafficking in profitability, bringing in an estimated $32 billion annually. The majority of those trafficked are young adults between ages 18 and 24 — but children also make up a large part of it. Almost all have experienced either sexual exploitation or violence, often both, during their time being enslaved.

But the statistics can be disputed. The United Nations notes that “the lack of accurate statistics is due only in part to the hidden nature of the crime, and that the lack of systematic reporting is the real problem.” In other words, the number of those trafficked worldwide might be far greater than what is estimated.

What we do know is that traffickers practice the trade with relative impunity. In 2006 there were 5,808 trafficking prosecutions and 3,160 convictions worldwide, which would mean that one person is convicted for every 800 people trafficked.

Though most of those trafficked are exploited for their labor and or are thrown into sexual servitude, the area that’s particularly grotesque is the organ trade. One human rights lawyer who did not want to give his name said cases involving the removal of human organs for transplantation are more miserable than those involving genocide.

“At one end someone is killed for their organs, which in some perhaps overly theoretical way is worse than murder,” he said. “In the latter, the victim’s death is at least a motive — the murderer seeks to kill a human being. In the former, the victim is merely a box containing an object, and the murder is merely the process of throwing out the box and wrapping.”

The international commodification of humans is becoming the new norm of our age. In Bangkok, Thailand, a “baby factory” was discovered last year in which more than a dozen Vietnamese women were impregnated (some were raped), and their babies were sold for adoption. Whether or not the babies — unregistered, non-existent in the eyes of the law — were truly adopted, raised to be slaves or farmed out for body parts is not known.

What is certain is that Vietnam, like many other impoverished countries with a growing population of young people, has become a major supply country, where vulnerable young women and girls are in high demand on the international market. In certain bars in Ho Chi Minh City, rural girls are routinely trucked in to parade at auction blocks. The girls are often naked except for a tag with a number on it, and in the audience are foreigners — South Koreans, Taiwanese and mainland Chinese are the main consumers — who call them down for inspection. They leave together under the pretense of marriage after the paperwork is done, but many end up in brothels or sweatshops instead.

Diep Vuong, executive director of Pacific Links Foundation, an organization that works to combat human trafficking by providing education to the poor in Vietnam, is pessimistic. Overpopulated and dwindling in resources, Vietnam is full of young, uneducated people.

“The only resource we have left in abundance are the humans themselves,” she noted wryly. “We’re moving toward the Jonathan Swift version of reality.”

While children of the poor are not being eaten as Swift sarcastically suggested, they are being abducted and enslaved. They work in the fields as slave laborers as in the Ivory Coast’s cocoa plantation where half a million children work and provide 40 percent of the world’s chocolate — something most of them have never tasted. Or they are abducted at ages as young as 5 in Uganda and forced to become soldiers. Or they work in the carpet and brick factories of South Asia, many shackled and branded by their masters. Those too weak to work are killed off and thrown into rivers.

Closer to home, border drug cartels have incorporated the lucrative human trade into their business, and in some parts of Mexico they have the tacit support of the local authorities. Mass graves were discovered last year full of migrants’ corpses. Their crime: They weren’t worth much alive.

The forces of globalization have only intensified the trade in humans. After the Cold War ended, borders became more porous. New forms of information technology have helped integrate the world market. Increasing economic disparity and demand for cheap labor have spurred unprecedented mass human migration. The poor and desperate fall prey to the lure of a better life.

In March 2004, eBay shut down sales when it discovered that three young Vietnamese women were being auctioned off, with a starting bid of $5,400. Their photos were displayed. The “items” were from Vietnam and would be “shipped to Taiwan only.”

“I was browsing on the Internet and this guy kept trying to chat with me,” one Vietnamese teenager rescued from a brothel in Phnom Penh recounted. “There’s a coffee shop in Cambodia. He said I could make money over there.”

They crossed the border from Vietnam to Cambodia, and she soon became enslaved. She was saved in a police raid, just as the traffickers were planning to move her again. The madam “was waiting for more girls to show up to ship us to Malaysia,” she said. Her fake passport had already been made.

The trafficking network is sophisticated and well organized, and if the lure of money and a better life elsewhere becomes the entrapment of the poor and vulnerable, the abundance of cheap labor coupled with an atmosphere of impunity becomes the seduction for others to become traffickers.

“A slave purchased for $10,000 could end up making her owner $160,000 in profits before she dies or runs away,” Siddharth Kara noted in a talk on sex trafficking at the Roberta Buffett Center for International and Comparative Studies at Northwestern University. In fact, a child in Vietnam can be bought for as little as $400.

Slavery is not going away because the agony of human enslavement remains largely invisible in the public discourse. It is just as shocking that Eritrean refugees are hunted nightly by traffickers as it is that their story remains hidden in darkness.