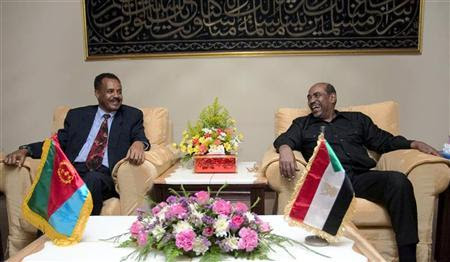 By Aaron Maasho
ADDIS ABABA | Mon Mar 26, 2012 10:37am EDT
(Reuters) - Eritrean President Isaias Afewerki accused the United States of plotting cross-border raids by Ethiopian troops, saying the two allies were out to divert attention from a festering border spat in the volatile Horn of Africa.
---------------------
Addis Ababa, Washington's main ally in the region, said it attacked military bases used by rebels inside Eritrea earlier this month.
The incursion followed a raid by an Eritrea-based rebel group into Ethiopia's remote Afar region in January in which five foreign tourists were killed and two kidnapped.
Last week's attacks were the first on Eritrean soil that Ethiopia has admitted to since the end of a 1998-2000 war that claimed 70,000 lives and left a border dispute unresolved.
Eritrea says there have been others.
"We have seen several attacks, not just one. We prefer not to talk about it and don't intend to be involved in provocations," Isaias told Eritrean state TV in an interview late on Sunday that was later broadcast on the Internet.
"The military incursions were plotted by Washington with the aim of diverting attention from implementing the boundary commission's decision," he said.
The U.S. embassy in the Eritrean capital of Asmara denied it had been involved in the attacks.
"The United States was not involved in the March 15 attack by Ethiopian forces inside Eritrea, contrary to media reports that have circulated in and outside of Eritrea," the embassy said in a statement.
"The United States categorically rejects any allegations that it planned, participated in, or supported the attack."
Ethiopian officials could not be reached for comment.
The Hague-based boundary commission awarded the border village of Badme to Eritrea in 2002, but Ethiopia has yet to conform with the ruling, insisting on further negotiations on its implementation.
The United Nations has called for restraint between the two neighbors, saying bilateral tensions risked undermining efforts to foster security and stability in the region.
MISSILES AND SANCTIONS
In Sunday's interview, Isaias said the U.S. Central Intelligence Agency had "fanned up" Ethiopia's incursion to divert global attention from the 10th anniversary of the border ruling and its implementation.
He also accused Washington of masterminding the sanctions that the U.N. Security Council imposed on Eritrea in 2009 and 2011, alleging it had provided funds and weapons to Islamist insurgents in Somalia - charges that Eritrea flatly denies.
"Proxies implement the U.S.' misguided agenda in the region. These unjustified sanctions against Eritrea reflect this agenda," Isaias said.
Ethiopia, a key ally in the United States' global war on Islamist insurgents, has deployed troops inside Somalia to fight al Qaeda-linked militants.
Isaias routinely claims Washington sided with Eritrea's arch-foe during the border war for "geo-strategic reasons".
In a leaked cable from the U.S. embassy in Asmara, former U.S. ambassador Ronald McMullen said Isaias feared the U.S. would try to kill him by firing a missile on his residence in the coastal city of Massawa.
The cable also showed that Isaias believes Ethiopian Prime Minister Meles Zenawi tried to have him killed in 1996 when an aircraft that Meles offered for his travel caught fire during a flight.
(Editing by James Macharia, John Stonestreet and Toby Chopra)
Posted by Guihon at 9:06 AM