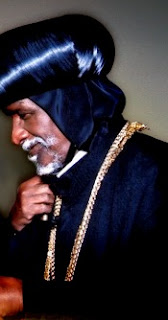 Patriarch Antonios was born in 1927 in the town of Hembrti, to the north of Asmara in the province of Hamisien. His father was a priest and at the age of five he entered the monastery of Debre Tsege Abuna Andrewes where he was educated for the service of the church, being ordained a deacon when he was twelve. Professed a monk and ordained priest in 1942, he was elected Abbot in 1955.
When the Eritrean Orthodox Tewhado Church first sought its independence, he was one of the five abbots of monasteries to be sent to Egypt to be ordained a bishop so that the church would have its own Holy Synod. He was ordained as Bishops Antonios of Hamasien-Asmara on 19 June 1994 in St. Mark’s Cathedral, Cairo, at the hands of His Holiness Shenouda III, Pope and Patriarch of Alexandria..
Following the death in 2003 of Abune Yacoub, second Patriarch of the Eritrean Church, he was elected Patriarch in popular elections which were unanimously endorsed by the Holy Synod. His ordination and enthronement as Patriarch took place on 23 April in Asmara, at the hands of Pope Shenouda III, assisted by Eritrean and Coptic Orthodox Metropolitans and Bishops.

The priests, deacons and religious faithful of the Eritrean Orthodox Tewahdo Church across the world are asking for prayer and support in calling for humane treatment and appropriate respect for His Holiness, Patriarch Antonios, the illegally deposed Patriarch of the Eritrean Church. Abune Antonios, widely regarded as the rightful occupant of the Episcopal throne of the Eritrean Orthodox Tewahdo Church, has been detained in an undisclosed location within the general confines of Asmara for approximately 7 years. His detention restricts Abune Antonios from exercising his spiritual leadership over what has become a widely dispersed church with members in many countries outside Eritrea who still look to him for spiritual guidance and reassurance.

The Œcumenical Canonical Orthodox Church Worldwide (ŒCOCW) which expressed its concern about Abune Antonios’s health several weeks ago now says it has reliable information that the Abune is in delicate health due to lack of proper medical care, and because he is suffering from humiliating and degrading treatment by the Eritrean Government in violation of his human rights. The Abune is 87 years old and suffers from the debilitating effects of advanced diabetes. The unattended medical condition of the Abune makes the concern a humanitarian rather than a political or church matter. The ŒCOCW notes there are widely repeated complaints that Abune Antonios, despite not being an enemy or a political or military threat, is being denied necessary medical care, one of the most basic of human rights, for a well known disease that is undoubtedly being exacerbated by inhuman treatment and advanced age. Despite his mistreatment, the ŒCOCW says its information is that Patriarch Antonios is always in good spirits and continues to pray for his jailors, as well as for his spiritual children in the Eritrean Orthodox Tewahdo Church. --

Concern had been growing about government interference in religious affairs and Patriarch Antonios increasingly resisted government interference, especially instructions emanating from Mr. Yeftehe Dimetros, the government’s official responsible for church matters. In January 2005 the Patriarch’s annual Nativity message was not broadcast or televised and the Eritrean Holy Synod met on 6-7 August 2005 with the main purpose of removing all executive authority from the Patriarch. Among accusations brought against the Patriarch, were his reluctance to excommunicate 3,000 members of the Medhane Alem, an Orthodox Sunday School movement, and his demands that the government should release imprisoned Christians accused of treason. He was allowed to officiate at church services but prohibited from having any administrative rôle in church affairs.
At first the government denied the removal of the Patriarch and pointed to the fact that he was performing certain ceremonial functions but while he was under virtual house arrest at his residence in Asmara a delegation travelled to Egypt on 25 July to seek the support of Pope Shenouda, for his deposition and replacement. His Holiness refused to recognise this as a canonical act and urged the faithful to pray for Patriarch Antonios who “is passing through a great tribulation. We hope that the Lord will rescue him.”

On 13 January 2006 a secret session of the Holy Synod was held in Asmara which formally removed the Patriarch from office and his detention was tightened to ensure he remained incommunicado. On 20 January, 2007, two priests accompanied by three security agents of the government entered the Patriarch’s residence and confiscated his personal pontifical insignia.
On 27 May 2007, in violation of the church’s constitution and canons, the government installed Bishop Dioscoros of Mendefera as anti-Patriarch. The same day, in the early hours of the morning, Abune Antonios, was forcibly removed from his residence and transported to an undisclosed location. The Patriarch suffers from severe diabetes and fears have been expressed for his continued wellbeing.