While  whole world is expecting him at the stadium to despite the roomer of his death. Other wise it will be transmitted by TV and Radio but yesterday he received the Sudanese dictator Omar Bashir at the air port may be himself or his duplicate... who knows


Peter Clottey
Eritrean President Isaias Afewerki is scheduled to address the nation as the Horn of Africa nation celebrates 21 years of independence Thursday.

Mr. Afewerki’s remarks are expected to be broadcast live nationwide via television and radio from the national stadium in the capital, Asmara.  Over 5,000 school children have been rehearsing for the past few weeks for the occasion. 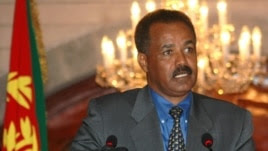 Eritrean President Isaias Afewerki (file photo)
​​Information minister Ali Abdu underscored the significance of the independence celebrations, which he said are meant to highlight the country’s achievements and address the expectations of its citizens.

“The people along with the leadership today will assess past achievements and chart future programs [of action] on the basis of a mutual exchange of views.  We stand in unison and with mutual understanding.”

Abdu said Eritreans are proud of their freedom. They have a deep appreciation of the anniversary following what he described as decades of oppression and the long struggle to separate from Ethiopia.

“We [have] taught our children words of responsibility and [given them the] wings of freedom,” Abdu said.

He said Thursday’s celebration will be attended by several high level dignitaries from other nations, including the president of Sudan Omar al-Bashir.

Abdu said the government has laid the groundwork for what he called the upward development of the country in its efforts to meet the needs of its citizens.

He said the country has “overcome all sorts of conspiracies” and made solidsocial, economic, political and cultural gains.

He insists the country’s leadership enjoys the support of all Eritreans, despite frequent criticism the administration is intolerant of dissent.

“We are not two separate entities -- that’s to say that one listens and the other gives orders. There is no distinction between the people and the leadership. The government evolves from the people, and [they] are the anchor of the government.  The government leads… by following its people,” he said.

Abdu expressed confidence in the future prospects of Eritrea citing what he called the self-reliance and unparalleled hard work of the citizens.

He said Eritreans are equipped to determine the country’s fate.

“There are lots of opportunities ahead [and] this is not just our optimism, it’s our determination to create [them]. We don’t believe on just waiting…. We are trying to create our future. And we will [do so] by working hard….We have just begun and we will continue,” he said.
Posted by Guihon at 2:12 AM