Outburst of a new Conflict at Badme Between Eritrea and Ethiopia on May 27, 2012 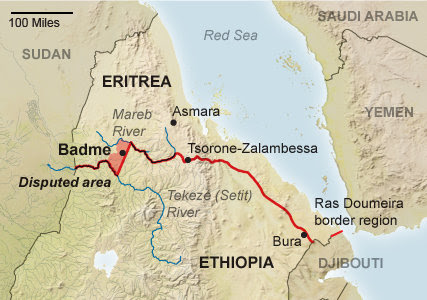 The two belligerent frères enemies dictatorial regime of Melese Zenawie and Isasias Afwerki started their war game that kept them in power for the last two decades. May is the month of the anniversary of their accession to power in  the horn of Africa  creating some of the most horrendous regimes of our time.

The linchpin of the conflict was the small town of Badme. The later was attributed by Allegers agreement between the two dictatorial regimes to Eritrea but still under Ethiopian control. The eponymous plain around the town is “relatively useless borderland” between boundary rivers, the Mareb in the north and the Setit in the south.

We remember on March 15, 2012, Ethiopia sent troops crossed the Eritrean border to attack three bases of the Afar Revolutionary Democratic Unity Front, allegedly in retaliation for the group’s attacks on a tourist party inside Ethiopia.