Eritreans: US, save us from deportation - Israel News, Ynetnews

Hundreds protest outside US embassy in Tel Aviv, call on Washington to pressure Israel into granting them refugee status
Gilad Morag
Some 500 Eritreans demonstrated outside the US Embassy in Tel Aviv on Friday in protest against the political persecution they claim they are experiencing in Israel. "We demand that the US pressure Israel and prevent it from violating our rights," they said.

They are also demanding that the US establish a mechanism to determine their eligibility for refugee status.

The protesters carried signs which read "We want protection" "No to deportation" and "US, save us." They are claiming that Israel wants to send them back to Eritrea where there an oppressive regime rules the country.

"The US is aware that Eritrea is a country that commits systematic oppression and must make it clear to Israel that it cannot deport refugees there. Interior Minister Yishai's statements don't hold water." 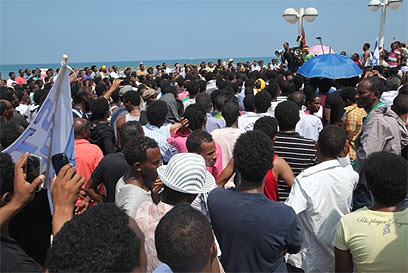 Molgieta, one of the protesters, says that the purpose of the protest is to achieve refugee status. "We are demonstrating against acts of violence by Israelis and the general treatment towards the community," he says.

"The violence attributed to Eritreans amounts to 1% of the entire community, he claims. "We may get deported but you must realize that our president is a dictator. We are given refugee permits all across the world and we are asking to get them here too." 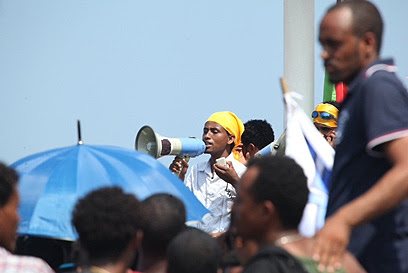 'Our president is a dictator' (Photo: Moti Kimhi)

Another protester added, "We didn't come here for a free meal, we are seeking asylum. We are being badly treated and are not being allowed to work but we cannot go back to Eritrea, because it is dangerous. You must understand that a dictatorship rules the country and whoever goes back is in immediate danger."

One of the organizers of the protest, Shai Gurski, said that the Eritreans believe that the US has influence over Israel and have submitted an open letter to one of the embassy staff.

"The latest events are getting the entire community nervous, the completion of the fence, the construction of holding facilities and the wild incitement against them."
Posted by Guihon at 11:58 PM