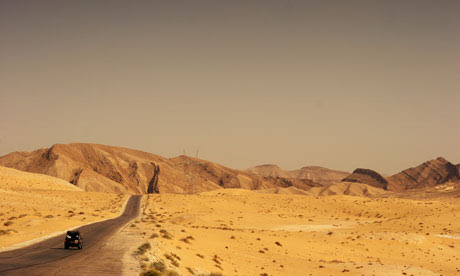 The report refers to a trafficking route running from the Eritrean highlands into the Sinai desert (pictured). Photograph: Photo By Niek Bokkers - Conceptm/Getty Images/Flickr RF
A multimillion-dollar arms trafficking industry that is funding the Eritrean military regime is behind the kidnap, torture and ransom of thousands of Eritrean refugees, according to a leaked report to the UN security council.
An investigation by the Somalia and Eritrea monitoring group has uncovered a trafficking highway running from the Eritrean highlands through Sudan's refugee camps into the Sinai desert, delivering arms to militant groups, and Eritrean asylum-seekers to Bedouin gangs, who use starvation, electrocution, rape and murder to extort up to $40,000 (£25,000) from relatives in the Eritrean diaspora for their release.
According to witness testimony, part of the arsenal smuggled from Eritrea is sold to Palestinian militants in the Gaza Strip. This industry, run jointly by Eritrean officials, Sudanese and Egyptian smuggling gangs, is estimated to generate more than $10m a year.
The monitoring group's findings, presented to the UN security council in New York earlier this month and leaked on Monday, place Eritrea in clear contravention of a sanctions regime imposed in 2009, which prohibits the sale of arms and military equipment to Eritrea and prevents Eritrea from exporting weapons.
The report names General Teklai Kifle "Manjus", commander of Eritrea's western military zone, as the mastermind.
"Multiple independent sources in Israel and the Sinai have identified General Teklai Kifle Manjus … as well as a string of intermediaries, as being directly responsible for the cross-border smuggling of humans and weapons from Eritrea," the report it states. "The weapons are generally described as Kalashnikov-pattern assault rifles and rocket-propelled grenades. Many bear the inscriptions of the Eritrean military units to which they previously belonged."
UN sources told the Guardian that the extent of corruption the industry requires on Eritrea's western border, and the scale of the exodus of asylum-seekers it involves, mean it would be impossible to run without the collusion of government officials. "If it hasn't come to the president's attention, I'd be very surprised," the source said.
But Tefamariam Tekete Debbas, Eritrea's ambassador to Israel, dismissed the allegations.
"If they can give 100% evidence, then this guy [Manjus] will be in jail in Eritrea. It is the same with the [accusations of] human rights abuses. Where are the facts? One lie is repeated so many times it is like a truth," Debbas said.
Eritrea, despite struggling with extreme poverty, rejects all foreign intervention, including food aid. With a population of little more than 5 million, it has one of the largest armies in Africa, made up of soldiers forced indefinitely into national service. According to a 2009 investigationby Human Rights Watch and the United Nations high commissioner for refugees (UNHCR), these conscripts are subjected to torture and illegal forced labour.
President Isaias Afewerki justifies this with the threat of a renewed conflict with Ethiopia, from which Eritrea gained independence in 1992 during a decades-long war, which officially ended in 2000.
Many of his citizens flee the country. The UN estimates that 3,000 people left Eritrea in every month of 2011, most for Sudan or Ethiopia, many bound for Israel. These are the refugees that fuel the Sinai smuggling industry.
The UNHCR estimates that almost 60,000 Eritreans crossed into Israel from Egypt between 2009 and 2011.
Avi Granot, head of the Africa division in Israel's foreign ministry, denies any knowledge of Eritrean arms entering Sinai, despite UN reports of an Israeli-Egyptian co-ordinated air strike on a weapons convoy in the Egyptian Sinai in 2010, in which Palestinians and Eritreans were killed.
Eritrea was a strategic ally, he said. It was the one friendly port on the Red Sea – the only waterway running south from Israel to Iran, Asia and beyond. He also believed reports of human trafficking and torture in the Sinai were "grossly exaggerated". "I served 17 years ago as ambassador to Ethiopia. One of the things I learned in the region is that lying is a justified means to achieve greater opportunities," he said.
Amnesty has presented to the Egyptian authorities evidence of extortion, rape, torture and killings of Eritreans crossing the Sinai peninsula and called for them to investigate and prosecute those allegedly responsible but a spokesman said that the Egyptian authorities "have done very little to protect victims of human trafficking".
Posted by Guihon at 6:04 AM