Israelis arrested in kidnapping Eritreans for Hamas in Sinai 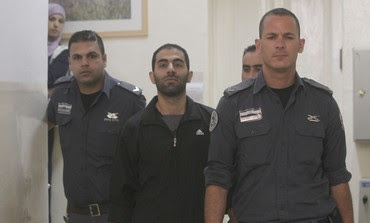 PHOTO: COURTESY JERUSALEM POLICE
Four Israelis were arrested for their involvement in an operation in Sinai that involved abducting African migrants and extorting up to $20,000 in ransom payments from their families in Israel, police revealed on Sunday.
Four Jews from Netanya and Kfar Yona, one of whom is a minor, were arrested for serving as contacts between the Eritrean migrants in Israel and an east Jerusalem man and suspected Hamas operative named Louai Nasser al- Din.
Din allegedly transferred the money to Hamas in Ramallah.
According to police, the month-long undercover investigation began as a straightforward investigation into money transferred by Din to Hamas. Upon further questioning, police discovered the money Din was allegedly transferring was the ransom money from at least one kidnapping.
Police are investigating whether the abductions are part of a larger operation.
On August 25 a man in Sinai calling himself Salam made contact with an Eritrean migrant living in Tel Aviv saying he had kidnapped the man’s nephew. Salam told the migrant he would have to pay $20,000 within two days or his relative would be killed.
When the migrant and further family members arrived at the scene of the exchange they refused to pay the ransom until they were able to speak to their nephew. They then agreed to hand over the money, but had only been able to come up with $13,000.
The money was handed over to two of the Jewish suspects, Yaakov Grad and Eliran Mahfoud Moshe, during a clandestine meeting at the Central Bus Station in Tel Aviv.
The suspects then took the money to Din – who owns a cellphone store on Salah a-Din Street – on August 28. Din was supposed to transfer the money to Hamas in Ramallah.
Police arrested Din just after his meeting with the two men, with the ransom money still in his store. They arrested a third man, Victor Savioni, also of Netanya, who police believe was the main contact point for Salam, whose real name is Amad Abu Arar.
Din’s lawyer, Lea Tsemel, denied on Sunday that the money was ransom money and that it was destined for Ramallah. Police have investigated Din in the past for involvement in Hamas activities, but according to Tsemel he was released without charge.
Police believe the suspects were involved with six money transfers to Hamas of between NIS 10,000 and NIS 15,000, although only one of them appears to be involved in the kidnapping.
Police said Savioni met Hamas activists while working at a construction site in Netanya and became involved with money transfers between Israel and Gaza for Hamas.
During the investigation the men told police that they did not know the money was destined for Hamas.
On Sunday, indictments for Grad of Kfar Yonah and Moshe of Netanya on counts of kidnapping for the purposes of extortion and murder were filed in the Jerusalem District Court.
An indictment against Savioni of Netanya was filed in the Jerusalem Magistrates Court on counts of assisting the commission of a felony and illegal border infiltration Din was remanded for an additional five days on suspicion of membership in an illegal organization and kidnapping, at the Jerusalem Magistrates Court. The Jewish minor was released to house arrest.
Earlier this year, an indictment charged Yusuf el-Qarinawi – a resident of the Negev Beduin city of Rahat – with membership in a crime ring that abducted Sudanese and Eritrean refugees in Sinai. The gang in Sinai allegedly took hostages in order to extort tens of thousands of dollars in ransom from family members in Israel.
Investigators believe Qarinawi was a kingpin, connecting gang members in Gaza, Hebron, Tel Aviv and Sinai.
He was charged with concealment of an abducted person; blackmail with use of force; blackmail with threats; and conspiracy to commit a crime.
Also last year, the Hotline for Migrant Workers released a report that detailed the horrifying ordeals reportedly suffered by African migrants to Israel held captive by Beduin smugglers in Sinai.
The report, entitled “The Dead of the Wilderness,” depicts incidents of rape, torture, murder, extortion and near starvation that were described during interviews with 60 African migrants mainly from Eritrea, 24 of them women and 36 men, who reported suffering severe brutality on their way to Israel.

Jerusalem Post staff contributed to this repor
Posted by Guihon at 12:05 AM