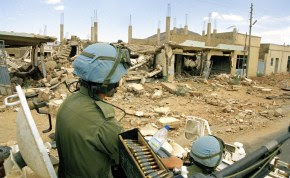 The group alleged that Eritrean leaders have become more than ever corrupted and are lately confiscating military budgets to their own coffers.
The opposition leader further said the Red Sea nation is witnessing a growing division among political and military leaders of the country.
As a result "the Eritrean Army has intensified its opposition against the ill military policies" he said adding "Eritrean defence forces doesn't any more have the trust on its leaders and has lost the spirit to militarily defend [their] own nation".
Haron said, now was the right time to act against Eritrean government, calling on the Eritrean Army, opposition forces, as well as the Eritrean people at home and aboard to jointly unite to oust the regime.
According to the opposition group the mass revolution could be ignited in the coming few weeks.
Eritrea is a one party state, and does not have any legally functioning political opposition to the ruling People's Front for Democracy and Justice (PFDJ).
MILLITARY STIKE
The Ethiopian-based, Red Sea Afar Democratic Organization (RSADO) vowed to carry out military strikes to topple the Eritrean regime.
Military officials of the group on Tuesday told Sudan Tribune that its fighters are making necessary preparations to carry out strong military offences. RSADO leader called on all Eritrean opposition forces to unify.
The Eritrean Afar forces have in the past carried out a number of cross border military attacks against targets inside Eritrea.
Rival Ethiopia which fought a border war with Eritrea during the 1998-2000 has in the past said it was ready to help the opposition forces and the people of Eritrea in their struggle to topple the regime of Isaias Afeworki.
Ethiopia and Eritrea frequently trade accusations of backing rebel groups to destabilize one the other.
Addis Ababa accuses Asmara of supporting outlawed rebel groups such as the Oromo Liberation Front (OLF) and Ogaden National Liberation Front (ONLF) as well as the Somali al-Qaeda-affiliated al-Shabaab.
Eritrea similarly accuses Ethiopia of harboring rebel groups including RSADO.
INTERNATIONAL HELP
RSADO chairman, Ibrahim Haron finally called on the international community to put pressure against the Eritrean regime and extend its support to the ongoing struggle to bring a democratic change in Eritrea
Haron noted an urgent need of international support to avoid the slide of Eritrea into a failed state like was seen in neighboring Somalia
Eritrea is among the world's top human right violators, according to human rights groups, who say that, thousands of political prisoners remain detained in secret underground jails without any charge.
Political repression, intimidation, and forced conscription have also driven tens and thousands of Eritreans into exile.