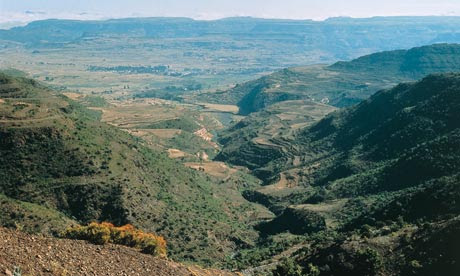 Eritrea’s largely untapped mineral wealth has provided a badly needed boost to the country's economic prospects in recent years. Photograph: De Agostini/Getty Images
The British government has been facilitating talks between a range ofmining and investment companies and the Eritrean government, whosehuman rights record is castigated in a Human Rights Watch report that says companies rushing to exploit Eritrea's rich resources risk involvement with widespread exploitation of forced labour by the regime.
Details of those who attended a roundtable meeting organised by the Foreign Office during a visit by officials from Eritrea, one of the world's poorest and most repressive countries, were released under the Freedom of Information Act.
They included representatives from Scottish International Investment Ltd, Investec, Frontier Markets Fund Managers, Copper Tree Capital, Plaza Holdings Ltd and the shipping company Nectar Group Limited.
Also present were representatives of Cluff Geothermal, a London-based exploration, production and consultancy company; Andiamo Exploration Limited, a private UK company exploring for gold and base metals in Eritrea; and Arabian Nubian Resources (ANS), a Guernsey-registered resources company exploring for gold and other resources. ANS boasted in an investor presentation in December 2011 that it had a "five-year relationship in Eritrea".
There is no suggestion that any of the companies at the talks last year have been involved with any exploitation of forced labour.
Two months before the roundtable, the UN security council toughened sanctions against Eritrea after east African neighbours accused it of continuing to provide support for the Somali Islamist insurgent group al-Shabaab, a self-declared affiliate of al-Qaida,
The resolution, put forward on the back of accusations denied by Eritrea, requires foreign companies involved in the country's mining industry to ensure that funds from the sector are not used to destabilise the region.
In a report released on Tuesday, Human Rights Watch says Eritrea's government continues to maintain a "national service" programme that conscripts Eritreans into prolonged and indefinite terms of forced labour, generally under abusive conditions, and that international mining firms "rushing to invest in Eritrea's burgeoning minerals sector" risk involvement in serious abuses unless they take strong preventive measures.
"If mining companies are going to work in Eritrea, they need to make absolutely sure that their operations don't rely on forced labour," said Chris Albin-Lackey, business and human rights senior researcher at Human Rights Watch. "If they can't prevent this, they shouldn't move forward at all."
Eritrea's largely untapped mineral wealth has provided a badly needed boost to the country's economic prospects in recent years, according to the report, titled Hear No Evil: Forced Labour and Corporate Responsibility in Eritrea's Mining Sector.
It identifies one mining scheme, the Bisha project – which Human Rights Watch says is majority-owned and operated by the small Canadian firm Nevsun Resources – as Eritrea's first and so far only operational mine. Since gold production started in 2011 it was said to have produced approximately $614m (£380m) worth of ore.
Human Rights Watch reports that other large projects led by Canadian, Australian and Chinese firms are in the pipeline and many exploration firms are exploring the various prospects.
It states: "Eritrea's government maintains a 'national service' programme that conscripts Eritreans into prolonged and indefinite terms of forced labour, generally under abusive conditions. It is through this forced labour programme that mining companies run the most direct risk of involvement in the Eritrean government's human rights violations.
"Human Rights Watch has documented how national service conscripts are regularly subjected to torture and other serious abuses, and how the government exacts revenge upon conscripts' families if they desert their posts. Many Eritreans have been forced to work as conscript labourers for over a decade."
The Eritrean state's human rights record was highlighted last year when the Guardian interviewed a soldier and member of its Olympic team who became the first Olympian from last summer's Games to go public on seeking asylum here.
A Foreign and Commonwealth Office spokesperson said: "The roundtable formed one part of the programme for the visit of the Eritrean delegation to the UK. The visit gave us the opportunity to discuss their role in the region and raise concerns over their human rights record at a high level."
A letter is being sent to the foreign secretary, William Hague, by Eritreans For Action, a group of exiled Eritreans in the UK, who warned that establishing a business relationship with the Eritrean regime would be "detrimental to the hopes and wishes of democracy-loving Eritreans".
"We ask what measures, guidelines and due diligence is the UK government undertaking when setting up business meetings, to ensure that funds from British [mining] companies are not being used [by the Eritrean government] to support terrorism and/or crimes against humanity," it says.
Posted by Guihon at 11:00 AM