Eritrea's Information Minister Confirms He Has Abandoned the Regime

Eritrean Information Minister, Ali Abdu Ahmed, once named many of the Year in 2009 by Ethiopian Review  has finally confirmed that he has fled Eritrea and left the regime. He made the admission in an exclusive interview over the phone with the Swedish newspaper Expressen Kassem Hamada this week. 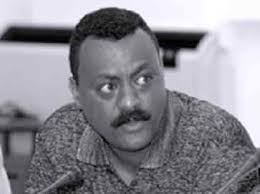 Ali Abdu had been one of President Isaias closest associates for many years. He took the decision to leave the regime while on a business trip to Germany in November last year. His disappearance led to the immediate arrest of his 15 year old daughter and a brother.
Ali Abdi did not answer questions about what prompted his defection from the government nor did he indicate where he was living. He did comment on the disappearance of Swedish journalist Dawit Isaak, imprisoned for more than a decade, and other dissidents, saying that neither he nor other ministers knew where they were held. It is only President Isaias himself and his closest security officials that have such information, he said, and it is "taboo to ask about things that are not related to one's job."
It appears Ali Abdu was responding to the interview questions via his brother Saleh Younis who lives in the United States where he runs the opposition website, Awate.com.
Posted by Guihon at 7:54 AM