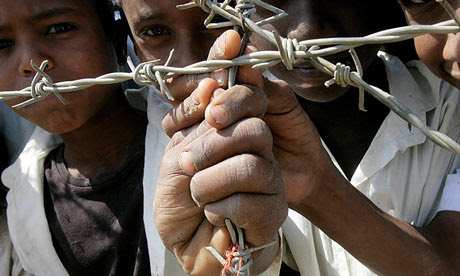 Eritrean children at Sudan's Shagarab refugee camp, which has received thousands of asylum seekers each month, largely from Eritrea. Photo: Ashraf Shazly/AFP/Getty
A military pilot sent by Eritrea to Saudi Arabia to reclaim a jet stolen by two fellow officers when they flew to seek asylum has herself defected, Saudi media has reported.
The pilot, who holds the rank of captain, told the authorities in Jizan province she did not wish to return to the east African country, a single-party state with no independent media and up to 10,000 political prisoners, Arab News reported.
The jet has been in Saudi Arabia since October, when it was diverted to the kingdom by its two officers who wanted to seek asylum, the newspaper said on Monday.
"She came to the kingdom two weeks ago to retrieve the military plane," Ali Za'le, a spokesman for Jizan governorate, was quoted as saying. "When she reached Jizan, she expressed her wish to stay here… her request is still being considered by the authorities."
Diplomats at Eritrea's embassy in Riyadh were not available to comment on the report.
Arab News said the pilot's father lived in Saudi Arabia.
Mass defections are common in Eritrea, considered one of the world's most reclusive states where dissent is dealt with harshly. Thousands of Eritreans flee the country each year, escaping unlimited conscription and poverty in the Red Sea state, aid agencies say.
Last year, 14 Eritrean footballers from the national soccer squad sought asylum in Uganda a year after 13 members of a club disappeared while participating in a regional tournament.
The UN refugee agency says more than 250,000 Eritrean refugees and nearly 15,000 asylum seekers live across the Horn of Africa.
Eritrea has a population of about 5.5 million. Earlier this year, dissident soldiers with tanks briefly took over the information ministry in Asmara, demanding that all political prisoners be freed.
Calm soon returned to the capital but Eritrean opposition activists in neighbouring Ethiopia cite growing dissent within the army over economic hardships.
Posted by Guihon at 12:40 AM