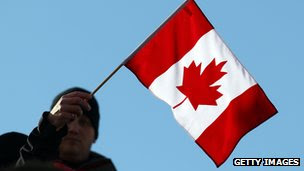 Canada has ordered an Eritrean envoy to leave the country following claims he demanded contributions from expatriates to fund Eritrea's military.
Semere Ghebremariam Micael, head of the Eritrean Consulate General in Toronto, has been under investigation for the practice.
It is in breach of both UN sanctions against Eritrea and Canadian law, the Canadian government said.
Mr Micael has been given until on 5 June to leave.
Warned previously

John BairdCanada's Foreign Affairs Minister
"Canada has taken steps to expel (declare persona non grata) Mr Semere Ghebremariam O Micael, consul and head of the Eritrean Consulate General in Toronto, effective immediately," Canadian Foreign Affairs Minister John Baird said in a statement on Wednesday.
"Today's actions speak for themselves," he added.
The dispute centres on the African nation's efforts to impose a 2% "diaspora tax" and "national defence" fee on Eritreans living abroad.
The UN Security Council toughened sanctions against Eritrea in December 2011 over its alleged support for Islamist militant groups such as Somalia's al-Shabab. The sanctions include a block on remittance tax imposed on nationals overseas.
Mr Michael has previously been warned against collecting funds from Eritrean expatriates living in Canada. The consul said it would comply with the Canadian government's ruling in September.
But recent reports said Mr Michael had again started demanding the payments.
"You have to go to the consulate and they arrange how you have to pay the money," one Eritrean in Toronto, who asked not to be named, told Canadian broadcaster CBC.
"They want 2%… they don't give you a reason. You have to pay the money," he said.
"My family [in Eritrea] would get in trouble if I don't pay."
Mr Michael has denied breaking the law, saying he was merely providing "information" to those who want to donate, according to Canada's National Post.
Posted by Guihon at 3:00 AM 25 comments: 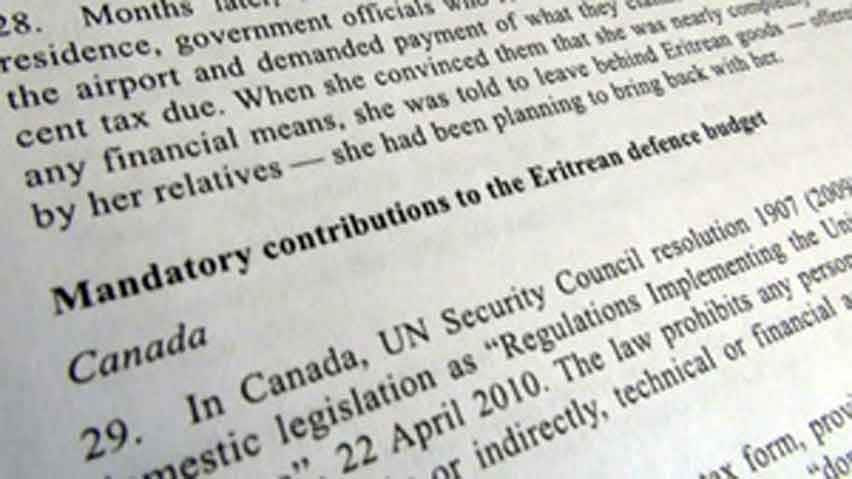 Eritreans in Canada say consul demands taxes1:51
TD Bank urged to exit Eritrean collection scheme1:34
A Canadian chartered bank being used in Eritrea's controversial tax collection scheme is being urged to get out of it, CBC world affairs correspondent Rick MacInnes-Rae reports today from Winnipeg.
The UN says Eritrea relies on threats and coercion to extract two per cent of the income from Eritrean citizens in Canada. In Winnipeg, the money is then funnelled to the East-African dictatorship via Toronto-Dominion Bank, documents obtained by CBC News show.
They show two branches of TD Bank are favoured by the man Eritrea designates to deal with the diaspora.
TD Bank is his vehicle for wiring money to the DZ Bank in Frankfurt, Germany, which routes it to a bank owned by the ruling party in Eritrea, a country under UN sanction for supporting armed insurgents in east Africa, MacInnes-Rae reports.
Ghazae Hagos, of the Eritrean-Canadian Human Rights Group of Manitoba, says Eritrea is moving the money through banks to sidestep Canada's recent ban on moving it through the consulate in Toronto.
"They have stop this right away, immediately," said Hagos. "They have to take measures to make sure that nothing like that will happen ever again."
Amnesty International is also calling on TD to quit handling the money transfers.
"Any company, including a big bank, should be very scrupulous about ensuring that it's not operating in ways that are going to contribute to, facilitate, and end up therefore being complicit in human rights violations," said Alex Neve, the secretary general of Amnesty International Canada.. "And that's the big troubling question here."
Contacted by CBC News, the banks were terse.
TD issued a brief email saying it's complying with all applicable laws and is "investigating the claims addressed by the CBC."
The bank said it has "rigorous controls to ensure we comply with Canadian economic sanctions regulations."
That theme was echoed by the DZ Bank, the bigger link in the chain since it deals directly with Eritrea, even though the German government frowns on the tax collections, MacInnes-Rae reports.
"All the transactions we carried out," DZ says, "were in compliance with the provisions of the European Union and the embargo regulations."
Neither bank responded to requests for interviews.
Posted by Guihon at 6:39 AM 4 comments:

Canada is investigating allegations that Eritrea's consulate in Toronto has continued to solicit money from Eritrean-Canadians despite the government's warnings to stop.
Text size:IncreaseDecreaseReset
Share via EmailPrint
Report an Error
Save to Mystar
By: Laura Kane News reporter, Published on Wed May 22 2013

Save to Mystar
Republish
The Eritrean government is still collecting taxes from expatriates in Canada to bankroll its military regime, despite being warned by the Department of Foreign Affairs to stop, a human rights group alleges.
New documents appear to show the Consulate General of Eritrea in Toronto has been imposing a 2 per cent income tax and a national defence fee of up to $500 on Eritrean-Canadians as recently as January.
According to the Eritrean-Canadian Human Rights Group of Canada, the tax and fee are collected in exchange for standard documents such as visas, passports or birth certificates.
Canada warned Eritrea in September to either stop soliciting the payments or recall its consul, Semere Ghebremariam O. Micael. The Eritrean Foreign Ministry responded in writing that it would comply.
The fees are illegal due to United Nations Security Council sanctions against the Northeast African country. Eritrea is among the most militarized nations in Africa and a supporter of Al Shabab, the Somali-based terror group.
But the human rights group says the consulate did not stop collecting the taxes, as shown by forms issued in November and January that appear to be requesting payment.
The only change that seems to have been made since September is that money no longer changes hands at the consulate; recipients of the forms are told to transfer funds to a German bank account.
David Matas, senior counsel for the human rights group, said the consulate is attempting to use a loophole to continue imposing the fees.
“As far as I’m concerned, they’re doing indirectly the same thing they were told not to do directly,” he said. “They should be evicted. They were warned and they didn’t comply.”
But Ahmed Iman, head of consular affairs at the Eritrean consulate, said it had ended its practice of requesting tax payment in exchange for standard documents.
Since September, the consulate has sought payment only from those who wish to do business in Eritrea — including those looking to inherit, buy or sell property — because it is the country’s law, he said.
“You want to do business, you must obey the rules of the country,” he said. “It’s an obligation to all Eritreans. This country is starting from zero, from scratch. The money is for helping the people.”
Eritrea declared independence from Ethiopia in 1993. Consular officials have long claimed the fees are not used to fund the military, but to build schools and hospitals in the impoverished country.
Iman added that the consulate has never used scare tactics to convince expatriates to pay, despite a UN report in July that said Eritrean-Canadians feared arrest or threats to their family in Eritrea if they refused.
Ghezae Hagos, who speaks for the Manitoba chapter of the human rights group, called Iman’s claims “outright lies.”
He said that many Eritrean-Canadians had been “shaken down” for money even if they had no business in the nation. Hagos urged the Canadian government to close the consulate immediately.
“The issue is not about the consulate office anymore, which has continued to openly and aggressively defy Canada. It is about the resolve of the Canadian government,” he said.
One Eritrean expatriate in Toronto, who asked not to be named out of fear, said he was forced to pay the tax in late September so that his sister in Eritrea could have her business licence renewed.
“They find out if you have family living out of the country so they can collect as much money as possible,” he said through a translator.
The Department of Foreign Affairs website warns expatriates against paying taxes to the Eritrean government. “Payments made in support of military and similar activities . . . may be prohibited under Canadian sanctions,” it states.
Rick Roth, Baird’s press secretary, said the department is investigating the new allegations and has communicated its concerns to the Eritrean government both in Eritrea and Ottawa.
“We take these allegations very seriously, and are currently working to determine if the Eritrean consulate is continuing to disregard Canadian law,” he said. “These actions, if true, will have repercussions. We expect the Eritrean government not to test our resolve.”
Posted by Guihon at 6:37 AM 3 comments: