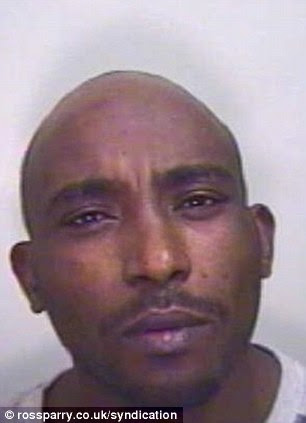 'Dangerous': Ybrah Haylemaryam, who entered the country illegally from Eritrea in 2003, has been jailed for 20 years for two rapes
An asylum seeker who escaped justice after he imprisoned and raped a 20-year-old student in his flat went on to commit another brutal sex attack eight years later.
Ybrah Haylemaryam, 26, who entered the country illegally from Eritrea in 2003, grabbed his first victim as she was walking home from a night out and forced her back to his home in Hull.
The desperate young woman eventually managed flee after he went to the bathroom.
But although the victim reported the rape in 2004, and Haylemaryam was interviewed, prosecutors said there was not enough evidence for him to be charged with the offence.
Eight years later he carried out another attack on a young mother who had been on a date with him after she spurned his advances.
Her baby was in the next room during the horrific three-hour ordeal.
The crime led to Haylemaryam's previous case being reopened and he was charged with four counts of rape, two counts of false imprisonment and three sexual assaults on the two victims.
Today, he was found guilty by a jury and jailed for 20 years at Hull Crown Court.
But police believe more women may have suffered at the hands of Haylemaryam in the intervening years and appealed for any potential victims to come forward.
His first victim, who cannot be identified for legal reasons, said today: 'Although I’m really happy with the sentence, I’m angry that this has happened to someone else and he has been allowed to do that.
'I was upset at the time that it wasn’t taken any further but I could understand the reasons because it was my word against his.'
Now 29 and working in social care, the victim expressed her shock when she discovered during the trial that Haylemaryam was living near to her at the time of the attack.
She said: 'I can’t believe he lived just a few streets away from me, that really shocked me.
'I don’t know what I’d have done if I had seen him in the street in the years after my case. I would have probably froze in my steps.
'He pestered me and all of a sudden just flipped, and the other victim described to me exactly the same what he did to me to her. I thought he was going to kill me.
'I feel lucky that I did get out, and I have got to thank the specialist support and counselling I have had from everyone.
'I hope I get a bit of closure now, but it’s the fear of someone doing that to you again that never goes away.
Justice: Asylum seeker Ybrah Haylemaryam was jailed for 20 years at Hull Crown Court today

'If he was deported, then I won’t have to worry about him ever again. I’m hoping to now move on with my life, knowing he is behind bars.'
Judge Mark Bury called Haylemaryam a ‘dangerous offender’.

'You have been convicted by a jury of two sex attacks on two different women, eight years apart,' Judge Bury said.
'You pose a significant risk to members of the public, and you are a dangerous offender.
'(In the case of the first victim) you took full advantage of a vulnerable victim and you were a stranger to her.
'Once inside your flat, you were aggressive to her and raped her. She was terrified, and thankfully managed to run away.
'She was very distressed in the witness box after being shown photos of the flat where the rape took place, and the memories came flooding back to her.
'The second victim’s ordeal lasted three hours, and you forced her against her will.'
Judge Bury said it is unlikely that Haylemaryam will be returned to his home country of Eritrea upon his release, and could possibly be deported to South Africa.
Paul Genney, defending, said that Haylemaryam was on his way to coming to terms with both rapes, which he initially denied at trial.
Detective Inspector Alan Bentham said: 'Officers from Humberside Police’s public protection unit are appealing to any further women who may have been subjected to attacks from Ybrah Haylemaryam to contact them.
'Haylemaryam has been convicted of numerous rapes and sexual assaults against two women.
'We praise the victims in this case for having the courage to come forward, having been put through horrendous ordeals by Haylemaryam, who falsely imprisoned them and subjected them to violent, sexual attacks.'