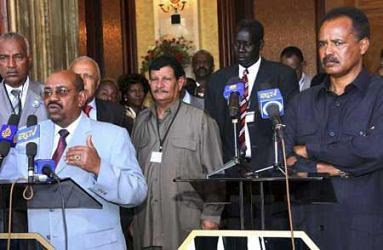 July 29, 2013 (ADDIS ABABA) – In fresh allegations made by Ethiopia on Monday, the East African nation said that efforts to maintain peace and stability in Somalia is taking longer due to Eritrea’s continued support of the Islamist militia group, Al-Shabab.

“Although relative peace and security is gained in Somalia, Eritrea didn’t reduce its support to Al-Shabab and remains to be a destabilising influence”, Ethiopia’s foreign affairs spokesperson, Dina Mufti, told Sudan Tribune.

“Eritrea continues to violate UN Security Council (UNSC) resolutions and the country absolutely remains to be a regional security threat”, he added.

The Ethiopian government said it has its own, as well as international evidence to support its latest allegations against the secretive Red Sea nation.

Mufti said there was a need for tightened sanctions to cripple Eritrea’s negative role across the volatile East African region.

Eritrean envoy to the African Union (AU) in Addis Ababa was on Monday unavailable for comment.

In 2009, the UNSC imposed sanctions against Eritrea for its role in financing, as well as providing arms and military training to the Al-Qaeda-linked group, Al-Shabab.

The sanctions also include an arms embargo, travel ban and assets freeze against the country’s senior political and military officials.

Asmara has repeatedly denied allegations of backing Al-Shabab, accusing the US and its regional ally Ethiopia of running “smear campaigns” aimed at tarnishing the country’s Image.

Eritrea has repeatedly demanded that sanctions be lifted, however, the UN monitoring group on Somalia and Eritrea - a panel which investigates violations of imposed sanctions, insists it is too early, arguing that Eritrea has shown little improvement.

Relations between Ethiopia and its former province remain tense after the two neighbours engaged in a 1998-2000 border war that killed an estimated 70,000 people.

Meanwhile, Mufti has dismissed unconfirmed reports that the Horn of Africa nation is planning to pull-out the thousands of troops it deployed in Somalia.

“There is no an immediate plan of withdrawing our troops from Somalia”, Mufti said

According to the Ethiopian official, troop pull-out depends on the pace of progress achieved in Somalia.

“Ethiopian forces will remain in Somalia until AU peacekeepers and particularly the Somali government forces build up military capability that would fully enable them to defend existing security threats in their soil,” he said.

He reiterated that Ethiopia will continue to extend all necessary support to the Somali government until such time durable peace and stability is achieved.
Posted by Guihon at 1:54 PM