Senior military officers kidnap and hold to ransom youngsters, and many are sold on to human traffickers, according to report 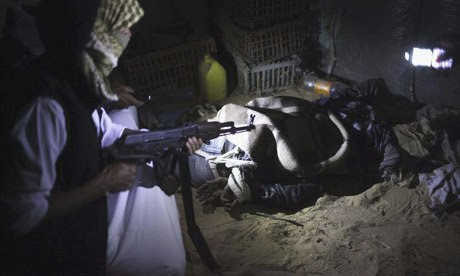 A Bedouin guards an Eritrean, who is to be smuggled into Israel, in an area close to the Egyptian-Israeli border. Photograph: Asmaa Waguih/Reuters
Eritrean youths are being kidnapped by senior military officers, smuggled into Sudan and held to ransom, according to a report by Dutch and Swedish researchers. The captives are threatened with being sold to people traffickers if they do not raise tens of thousands of dollars. Some are freed if they raise the ransoms. Others are sold on to Bedouin traffickers in Sinai, even after money has changed hands, only to be tortured to extract further cash from their relatives.
Basing their findings on interviews with 230 Eritreans who suffered this fate, the researchers conclude that between 2007 and 2012, some 25,000 to 30,000 people were trafficked. The report, by Meron Estefanos, a Swedish human rights activist, and Professor Mirjam van Reisen and Dr Conny Rijken of Tilburg University in the Netherlands, estimates that $600m has been extracted in this way.
In the report, The Human Trafficking Cycle: Sinai and Beyond, published on Wednesday, researchers accuse Eritrea's Border Surveillance Unit, under the command of General Teklai Kifle (alias Manjus), of being at the heart of these operations. The UN has named the general and several of his senior officers, as being involved in human trafficking, but this is the first time first-hand accounts have been published.
The Eritrean government requires every pupil to complete their final year of high school by serving in Sawa Military Camp, in the desolate, semi-desert region of eastern Eritrea. This means that most 16- and 17-year old children go there to complete their studies.
The study interviewed an Eritrean woman living in Sweden who told them her son was abducted from the camp. He and six other children were forced into a car by a high-ranking Sawa military officer and driven into Sudan. Once there, they were made to call their parents, who were given three days to pay $ 7,500 or they would be sold to traffickers.
Eritreans know what such a fate holds in store: imprisonment in underground cells and systematic torture while their screams are played to relatives on mobile phones. Girls are regularly raped, sometimes repeatedly and in public. Until they can pay up, there is little hope of escape.
These particular children were lucky. When the money was paid, they were freed in the Sudanese capital, Khartoum. The researchers believe this was not an isolated incident. They quote several reports dated October 2013 indicating that 211 children were kidnapped from the camp and a ransom of $10,000 demanded for each of their release.
"Some Eritreans are keen to be smuggled out of the country," Van Reisen told the Guardian, "but some of those who are abducted had no intention of leaving Eritrea." She cites the example of a mother of three who explained how she was kidnapped in the Eritrean capital, Asmara.
The woman, who cannot be named, says she went to a meeting with a business partner in the city. The next thing she remembers was waking up in the Sudanese border town of Kassala. She, and three other captives, were told that if they didn't pay $10,000 each within a few days, they would be sold to Bedouin traffickers in Sinai.
The families of the woman and three men paid the ransom demanded, but instead of being released they were taken to the Sinai, where a further $35,000 was demanded. Eventually some of the hostages were freed, only to be arrested by Egyptian troops. The woman is now reported to be staying in a house in Sinai, waiting to travel to Cairo.
Van Reisen and her colleagues say that many Eritreans do not survive the trafficking and the torture. They estimate that between 5,000 and 10,000 of the hostages died or were killed in captivity. In some groups as many as half lost their lives. Children as young as two or three years old are among the victims.
Even after they escape the clutches of the people traffickers, the Eritreans are not safe. In 2012 the Israeli government adopted an anti-infiltration law – using a term normally reserved for Palestinians attempting to enter the country. This definition has been extended to African migrants, and since July 2012 refugees and asylum seekers entering Israel have been detained. A new fence has been built along the Israel-Egyptian border in Sinai, and groups of Eritrean survivors of torture huddle against it, unable to proceed.
Posted by Guihon at 12:20 AM