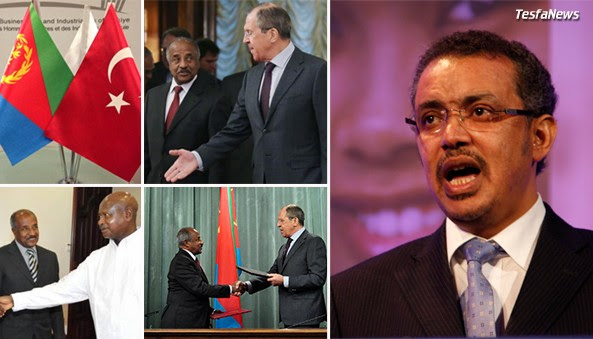 A recent written directive by the Ethiopian Foreign Ministry shows how much the government is worried by Eritrea’s latest diplomatic salvo, wondering if that might eventually lead to abrogate the sanction
By TesfaNews,
The Ethiopian Foreign ministry has issued this week a special directive to its diplomatic missions around the world to start countering Eritrea’s latest active diplomatic successes that aimed at fostering trade and economic co-operations besides garnering the much needed political support to end the politically motivated, U.S. engineered United Nations sanction on the country.
The directive orders all Ethiopian diplomats and heads of missions to start immediate diplomatic activities and lobbying works within their respective host states in order to maintain the sanction imposed on Eritrea.
Eritrea recently appointed 14 new ambassadors to carry out its renewed and active diplomatic maneuvers in a number of African, Middle Eastern and Asian countries. Some of the recent major diplomatic achievements includes the establishment of full diplomatic relation with Turkey and the signing of the first ever economic and diplomatic cooperation agreements with Moscow.
Eritrea also renewed its active diplomatic engagement with neighboring countries like Uganda, Kenya and Egypt besides the excellent relation it enjoys with the two Sudans. It has also appointed new ambassadors to the EU and Norway after a European Union delegation visited Asmara and agreed to reactivate its development partnership program in the country.
Sweden also showed interest in renewing its long frozen relation with Eritrea first by assigning a non-resident ambassador to Eritrea and followed by rejecting the looming politically motivated ban on the 2% Eritrean “diaspora tax’ in the country by the the Swedish Riksdag.  Eritrea reciprocated the good gesture by appointing its first ambassador to the country in nine years.
Eritrea also resetted its one time frosty relation with the United Nations after a delegation comprised of regional directors from UNDP, UNICEF, IOM, UNFPA, ILO and WFP headed by the Chair of the regional United Nations Development Group (UNDG)  for Eastern and Southern Africa, Mr. Abdoulaye Mar Dieye, concludes a three days visit to Asmara. Eritrea reciprocated by assigning a new envoy to the world body.
Such new developments are on top of the formal diplomatic ties the country enjoys with almost all UN member states and the over 30 Embassies and Consulates it has all over the world while it also hosting a similar number in its capital.
In the face of such highly successful diplomatic gains within a short period of time along with the recent pronouncement by three prominent American diplomats on the legality of maintaining the sanction in the absence of any real or fabricated evidence linking Eritrea with Somalia rebels, the Ethiopian government have every reason to worry that such unexpected diplomatic successes might eventually lead to the lifting of the sanction.
The Ministry’s directive stressed that the bulk of this new assignment will be conducted through its Ambassadors in Canada, Australia, Denmark, North and South Sudan, UK, USA, France, Germany, Israel, Italy and Norway.
The directive finally concludes by instructing all diplomatic missions to report back to the ministry by the end of the month regarding the outcome of their assignments.
Posted by Guihon at 2:38 AM