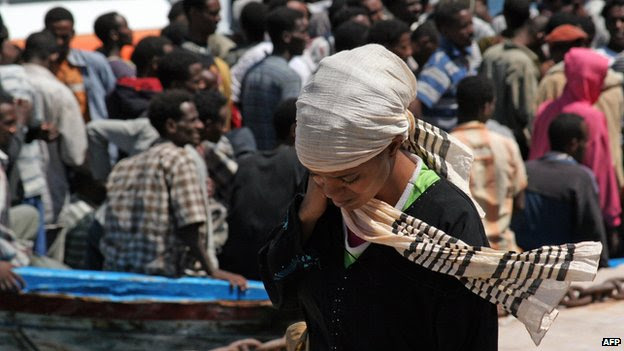 In our series of letters from African journalists, film-maker and columnist Farai Sevenzo considers why Eritreans endanger themselves so much to reach Europe.
The Mediterranean is fast becoming a massive watery grave for Africans.
Another 500 reportedly drowned off the coast of Italy the other week, while the attention span of the world quickly moves away.
But who are these Africans willing to risk all to reach European shores where they are not wanted?
Those of us following the story of African migration will have noticed a marked increase in the number of Eritreans being interviewed in refugee camps on the edge of Europe.
Continue reading the main story

Conscription into the army has been likened by many to slavery”


President Isaias Afewerki is accused by human rights groups of turning the tiny East African country into "one giant prison" and brooks no opposition.
The Eritrean parliament has not met since 2002. As for elections, they have not happened since Eritrea broke away from Ethiopia voting for independence in 1993.
But is that reason enough for this tiny nation to keep haemorrhaging its citizens at such an alarming rate?
The young men and women who survive trekking across the desert and make it across the Mediterranean in wooden boats further endanger themselves by climbing on to lorries in European ports to try and find a place to make a life.
In Eritrea, they are expected by President Isais' government to do national service until they are 40.
All around them high-ranking government officials are locked up, opposition members are imprisoned, the private press has been gagged for decades and President Isaias keeps flexing what military muscle he has by constantly threatening another border war with Ethiopia.
And he has also been accused of sending his soldiers across the border of another neighbour, Djibouti. 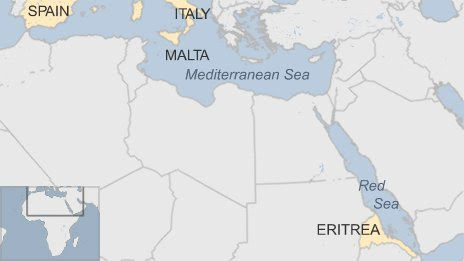 The Eritrean government maintains those leaving are economic migrants.
"This phenomenon where the youth are leaving their countries to go to the richer countries is an international phenomenon and it should be fought by the international community," Eritrea's ambassador to Italy Zemede Tekle Woldetatios told the BBC last year, blaming human traffickers.
He said continuing conscription was the fault of Ethiopia's refusal to withdraw from the border town of Badme, awarded to Eritrea by the UN more than a decade ago.
Kinship forgotten


But the numbers speak for themselves - a population of 6.3m is responding with their feet and emptying the country with despairing frequency.
The UN estimates that as many as 3,000 people every month are trying to leave his rule by any means possible.
These are difficult times to be a refugee. 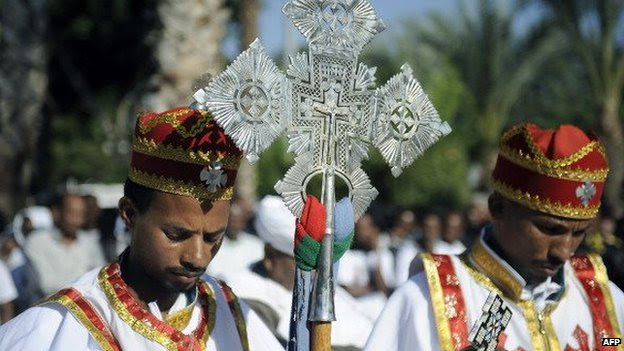 The Orthodox Church of Eritrea is the country's largest Christian denomination
Europe, its politicians tell us, is full. The mass of legal immigrants pouring out of the east has knocked the fate of Africans back; sympathy for the plight of those fleeing persecution has all but evaporated.
Africans have always had a complicated relationship with their leaders, but Mr Isais seems to have cloaked himself in robes of one from the 1970s - unaccountable and seemingly obsessed with power.
In June, the UN Human Rights Council set up a commission of inquiry into human rights abuses in this tiny Red Sea nation, which will report back in just under a year.

Eritrea at a glance:

There are other Eritreans who left before the rush to escape.
They are dotted all over the world and may have known their land before it was forever split from Ethiopia. They talk of the kinship between nations, of how Mr Isais and the late Ethiopian leader Meles Zenawi were in fact cousins.
They run little corner shops in cities like London and call them "The Red Sea".
They are a people estranged not from their country, but from their leader.
Earlier in June, Eritrea's bishops commented on this massive flight of the citizens by calling the country "desolate".
"If," they wrote, "you are in a country of honey, there is no need to look for another one." 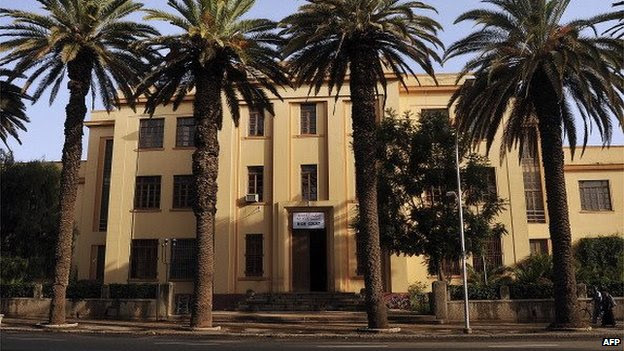 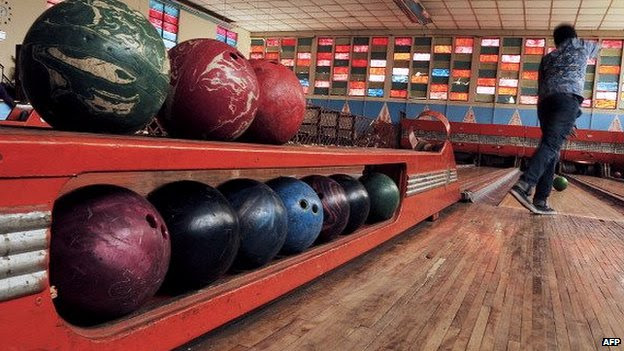 This bowling alley was built in the 1950s This pharmacy in Asmara still has its old Italian fixtures and fittings
They elaborated:
"If you own a peaceful country where there is justice and where you can work and loudly speak your mind, it is obvious that we will have youths flocking back from exile but not youths eager to leave their country, for nobody would look for honey which they already have."
Amnesty International says since independence, the Eritrean government has imprisoned 10,000 of its citizens.
Conscription into the army has been likened by many to slavery and families are doing everything they can to pay the people smugglers to save their children from President Isais' grip.
Of course we would all be hard pressed to understand why such a rule has not come under more international scrutiny.
The world is far too connected now, so much so that human rights abuses in a tiny East African country will wash up as bodies on the pristine beaches of Italy, Malta and Spain.
More should be done to look at what is going on in Asmara, a city whose art deco beauty is being choked by the weeds of bad governan
Posted by Guihon at 1:59 AM