Security Council resolution 1907 (2009) specifically prohibited Eritrea from “harbouring, financing, facilitating, supporting, organizing, training, or inciting individuals or groups to perpetrate acts of violence or terrorist acts against other States or their citizens in the region”.
Ginbot Sebat
78. Ginbot Sebat is a banned opposition group formed in 2009 by Amhara political elites committed to regime change in Ethiopia through armed struggle.[i] The Monitoring Group has previously documented Eritrea’s support to Ginbot Sebat (see S/2011/433 and S/2012/545). In 2012, the Group received corroborating testimonials that three Ginbot Sebat fighters had been trained in the western military border zone under the direction of Colonel Fitsum. At the time, the Monitoring Group was unable to reach a conclusion as to the former fighters’ organizational affiliation or to verify their accounts of military training, but it did conclude that they had direct contact with Colonel Fitsum [Yishak]. 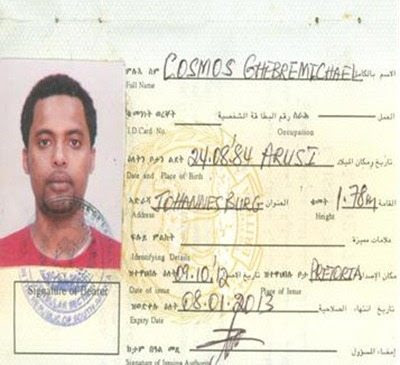 80. The first fighter was captured in January 2014, while on a reconnaissance mission inside Ethiopia. During a meeting with the Monitoring Group on 3 February 2014, while he was in detention in Ethiopia, he said that he had been a supporter of Ginbot Sebat and that he had been recruited into their military wing while working as a day labourer in neighbouring Sudan. Eritrean soldiers picked him up and took him to Eritrea, where he was subsequently sent to a training camp in Harena (see annex 7.1 for a map with the location of Harena). There, he joined 28 others and they were taught how to operate machine guns, bombs, and hand grenades. He identified a captain in EDF(Eritrea Defence Force) by the name of Dawitt as the person in charge of running the training and day-to-day operations for Ginbot Sebat. In December 2013, the detainee said that Dawitt had instructed him and two other Ginbot Sebat members to travel to Ethiopia to identify strategic locations and routes for the future movement of weapons. Areas identified were Awasa in the Great Rift Valley, Gewane in the Afar region, and Gondar in the Amhara region of Ethiopia (see annex 7.2 for map). Ethiopian security forces arrested the three fighters while they were travelling through the forest in Gondar on 20 January 2014.
81. When he and his colleagues were captured inside Ethiopia, they were allegedly carrying weapons that were made available to the Monitoring Group for inspection. These included hand grenades, AK-47s, and ammunition (see annex 7.3 for the weapons recovered from the fighters). The Monitoring Group examined the weapons and found that the serial numbers of the grenade pins were in similar sequence to grenade pins that the Monitoring Group had documented in 2011. The grenade pins that were found in 2011 were recovered on ONLF fighters trained and armed in Eritrea. They followed a sequence of “79”, which is the same serial number that was marked on the grenade pins recovered on the Ginbot Sebat fighters during the course of the current mandate.[ii] The consistency in sequencing strongly suggests a single original supplying source for the two sets of grenades, which the Monitoring Group established to be Eritrea in 2011 (see annex 7.4 for photographs of the pins inspected by the Monitoring Group in 2011 and 2014).
82. The two other former Ginbot Sebat fighters were part of another five-person fighter cell recruited in Johannesburg, South Africa, where they were working at the time. The Monitoring Group interviewed them individually on 16 and 17 January 2014. The first identified himself as a founding member of the armed wing of Ginbot Sebat, but he did not have any documentation to show his alleged rank or status within the group. He told the Monitoring Group that in October 2012, while living in South Africa, he had helped to establish the “Popular Front”, which he said was intended for drafting community members in the diaspora into the armed wing of Ginbot Sebat.
83. The second former Ginbot Sebat member told the Monitoring Group that he had been recruited by the Popular Front. His recruiters informed him that he would be sent to Eritrea for military training. The Embassy of Eritrea in Pretoria issued the new recruit with an Eritrean laissez-passer on 9 October 2012, which he used three days later to travel from Johannesburg to Asmara via Cairo on 19 October 2012 (see annex 7.5 for the travel document and electronic ticket provided to the fighter). 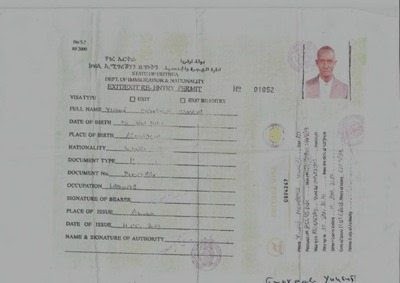 84. When the two newly recruited fighters arrived in Asmara, Ginbot Sebat Secretary-General Andargachew Tsige reportedly met them.[iii] They spent six months awaiting their training, which began in April 2013. The two men told the Monitoring Group that they had joined a group of 30 to 60 Ginbot Sebat fighters at the Harena military camp, where they claimed they had stayed until they fled to Ethiopia in December 2013. They reported seeing other armed Ethiopian opposition groups in Harena, including TPDM, the Amhara People’s Democratic Movement (APDM), and the Oromo Liberation Front (OLF).[iv] The training lasted for a month and it included guerilla warfare tactics and firearms training with hand guns, automatic weapons, explosives and anti-tank weapons. The fighters claim they then spent seven months in Harena waiting to be assigned on mission.
85. The Monitoring Group was unable to independently verify the claims of the former Ginbot Sebat fighters. But based on their corroborating testimonials and the inspection of documents and weapons recovered from them, it appears that Eritrea continues to provide some support to Ginbot Sebat. The Monitoring Group cannot, however, assess the extent of this support as compared with Asmara’s support of Ginbot Sebat in the past.
86. The Monitoring Group shared its findings with the Permanent Representative of Eritrea to the United Nations, Ambassador Tesfay, during a videoconference on 28 July 2014 and requested that Eritrea provide an explanation about the matching grenade pin serial numbers and the travel documents recovered from one of the Ginbot Sebat fighters. Ambassador Tesfay said that either Ethiopia or those captured by Ethiopia must have provided the group with the hand grenade pins and that Eritrea was also in possession of serial numbers of Ethiopian weapons. His answer was echoed in the official response of the Government, dated 13 August 2014 (see annex 4), in which it stated: “Travel documents that may have been easily forged by forces who have an interest in framing Eritrea; serial numbers of bullets or weapons that may have exchanged hands between Eritrea and Ethiopia in the course of their multiple wars in the past years … cannot be taken as iron-clad proofs of Eritrea’s misconduct that entail punitive action by the United Nations Security Council.” Moreover, the Government of Eritrea did not provide evidence to support Ambassador Tesfay’s claim that it was in possession of serial numbers of Ethiopian weapons.

The following is the text of the UN Monitoring Group on Eritrea concerning Eritrea’s support of the Tigray People’s Democratic Movement–an armed Ethiopian opposition group founded by dissidents from the TPLF.
Tigray People’s Democratic Movement
70. The Monitoring Group received multiple corroborating testimonies that Eritrea continues to support the Tigray People’s Democratic Movement (TPDM), in violation of paragraph 15 (b) of resolution 1907 (2009).
71. TPDM, also known by its Tigrinya acronym “Demhit”, is an armed Ethiopian opposition group founded in 2001 by dissidents from Tigray People’s Liberation Front (TPLF) of Ethiopia. TPDM says its aim is “to establish a popular democratic government of Ethiopia where the rights of nation and nationality are respected”.[i]
72. The Monitoring Group has previously reported on Eritrea’s support for TPDM (S/2012/545). In 2012, the Group found that TPDM was being trained in Harena, a Red Sea island off the eastern coast of Eritrea, as well as in smaller military training outposts close to the border between Ethiopia and Eritrea. The Monitoring Group obtained information that TPDM continues to be trained in Harena (see annex 7.1 for a map with the location of Harena).[ii]
73. TPDM regularly issues publicly available videos in which it affirms its commitment to taking up arms against the Government of Ethiopia.[iii] It is, however, difficult to verify information about military confrontations between TPDM and the Ethiopian army. A member of an NGO in contact with TPDM leaders told the Monitoring Group that he was informed of clashes in Benishangul, near the Amhara region of Ethiopia, in November of 2013.[iv] A former Eritrean general with active contacts inside the Eritrean military also told the Monitoring Group about an armed clash between the Ethiopian military and TPDM in the fall of 2013.[v] Moreover, the Monitoring Group received information that TPDM had participated in an armed crackdown on internal dissent inside Eritrea at the end of 2013.[vi]
74. Independent sources with relationships in the Eritrean military and with the Movement’s own leadership have told the Monitoring Group that TPDM had become the most important Ethiopian opposition group inside Eritrea and it had a dual function as an Ethiopian armed opposition group and a protector of the Afwerki regime.[vii] Its fighters, who are from the same ethnic group as President Afwerki, are seen to be personally loyal to him, unlike the defence forces whose loyalties have been questioned by the President in recent years.[viii] This is seen to be particularly relevant after the failed attempted “Forto” army mutiny confronting the Eritrean regime on 21 January 2013 (see S/2013/440).
75. The Monitoring Group estimates that there currently are tens of thousands of TPDM fighters.[ix] Two former senior Eritrean officials and a former Eritrean general, all of whom are in contact with officials in the military and Government, have told the Monitoring Group that Eritrea’s support to TPDM appears to be more
sustained and organized than its support for other Ethiopian armed groups.[x] A source with direct contacts within the leaderships of a number of armed groups described the TPDM as appearing to have “far more fighting capacity” than other Ethiopian groups.[xi]
76. The Monitoring Group also received information from two sources with active contacts inside EDF that weapons in the logistics department of EDF are being systematically transferred to TPDM.[xii] A reliable former senior Eritrean military source told the Group that he was informed by his former colleagues that the following weapons had been transferred from EDF to the TPDM in autumn 2013, most likely during the month of September: sniper rifles, Walther PP semi-automatic pistols, Doshkas, Tokarev T pistols, and binoculars.[xiii] The Monitoring Group has not been able to substantiate the information provided nor confirm whether the weapons given to TPDM came from old EDF stock or whether TPDM is being armed with weapons procured for the army after the adoption of resolution1907 (2009).
77. In Cairo on 15 February 2014, the Monitoring Group raised the question of the source of the weapons used to arm TPDM with the Senior Political Adviser to the President of Eritrea, Mr. Gebreab. Mr. Gebreab told the Group that the Government of Eritrea does not support TPDM, which he said was interested in fighting the Government of Ethiopia. He further stated that in his view, there were no arms going to TPDM. The Monitoring Group requested additional information on TPDM in two letters dated 7 March 2014 ( see annex 1) and 1 August 2014 (see annex 3). During a videoconference on 28 July 2014, Ambassador Tesfay, did not answer the Monitoring Group’s questions about TPDM, and he said that Ethiopian armed groups were a creation of Ethiopia’s internal dynamics. He stressed that Eritrea was not engaged in any internal destabilization in Ethiopia.
Posted by Guihon at 1:15 AM