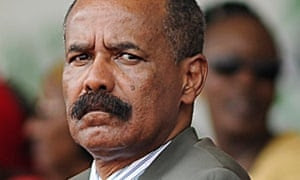 Human rights activists endorse the UN’s belief that abuses have occurred on the watch of Isaias Afewerki, the Eritrean president. Photograph: Simon Maina/AFP/Getty Images
he Eritrean government has been linked with “ruthless repression” and systemic human rights violations, including carrying out widespread detention and forcing citizens into indefinite military service, according to the UN’s first inquiry into human rights in the secretive country.
Rights abuses perpetuated by Eritrea’s government, coupled with dismal economic prospects, are driving hundreds of Eritreans out of the country every day, according to an interim report by the UN’s commission of inquiry on human rights in Eritrea.
“Most Eritreans have no hope for their future,” said Mike Smith, chairman of the commission, which was formed in June last year. “National service, whether in a military unit or in a civil assignment, is the only thing that from the age of 17 they can expect to spend their life doing – paid between less than $1 and a maximum of $2 a day.”
Describing Eritrea’s culture of “pervasive state control”, Smith said a network of spies had been created that permeated the basic fabric of everyday life. “A man employed by national security might not know that his daughter is similarly employed,” he said, noting that extra-judicial executions, enforced disappearances and incommunicado detentions were commonplace.
“Is it surprising that, faced with such challenges, Eritreans leave their country in their hundreds every day?”
As of July last year, more than 320,000 Eritreans had fled the country, according to the UN’s High Commissioner for Refugees (UNHCR). After Syrians, Eritreans are the second most common nationality to arrive on Italian shores.
The UN commission’s interim report, released on Monday, is based on interviews with about 400 people, including government officials, in five different countries. It incorporates 140 written statements relating to human rights abuses in Eritrea.
The commission expressed concern that Eritrea’s government had “so far not cooperated” with its investigation and did not respond to repeated requests to visit the country to carry out research.
But the commission said that Eritrea was making some progress in improving human rights, noting that it had ratified the UN’s convention against torture and promised to reduce national service to 18 months. The commission will deliver its final report on Eritrea’s human rights situation in June.
Human Rights Watch (HRW) said the interim report showed “that it is essential for Eritrea to remain on the Human Rights Council’s agenda for the foreseeable future”. In the past, HRW has urged the Eritrean government to release political prisoners, let independent monitors into the country, allow independent media and end indefinite national service. HRW said there is no indication of progress on any of these points.
Eritrea has long been regarded as one of the world’s most secretive states, even drawing comparisons with North Korea. It was ranked at the bottom of the 180 countries assessed in Reporters Without Borders’ (RWB) 2015 press freedom index.
“Eritrea systematically violates freedom of expression and information. It is Africa’s biggest prison for journalists, with at least 16 currently detained – some of them held incommunicado for years,” said RWB.
Eritrea’s president, Isaias Afewerki, who has been in power since de facto independence from Ethiopia in 1991, has for decades used the threat of an outbreak of war with Ethiopia as a means of keeping his people under tight authoritarian rule.
In 1998, a brutal border war broke out between Eritrea and Ethiopia, killing an estimated 70,000 people on both sides. Despite agreeing to a new border under the 2000 Algiers agreement, which ended the conflict, Eritrea claims that Ethiopian forces continue to occupy positions in its territory.
The ensuing military stalemate between the two sides has led Eritrea to adopt a “no war, no peace” position with Ethiopia, according to the commission. “It is an expression abusively used by the Eritrean authorities to disregard international human rights law as if Eritrea was in a legal limbo,” Smith said.
Accusations that Eritrea was supporting the Somali Islamist group al-Shabaab ledthe UN security council to impose an arms embargo on the country in 2009. The UN also levied asset freezes and travel bans on some officials.
Human rights activists are pushing for tighter sanctions against key figures in Eritrea’s government, saying they continue to commit crimes against humanity under the guise of protecting the country from Ethiopian aggression.
“If the UN inquiry concludes there is a situation of crimes against humanity in Eritrea, which I very much hope it will do, then we can say the international community is duty bound to respond with actions commensurate to that of crimes against humanity,” said Daniel Mekonnen of the Eritrean Law Society, who added that he is hoping Eritrean leaders would be referred to the International Criminal Court.
The Eritrean government responded to the UN’s inquiry by criticising its reporting methods. Tesfamicael Gerahtu, an Eritrean diplomat, said: “My delegation is dismayed at the protracted reliance on unreliable, unproven and sensational information and interactions. Preconceived ideas and conclusions on Eritrea have become rampant.”
Leslie Lefkow, HRW’s Africa director, said: “The [Eritrean] government’s refusal to cooperate with human rights investigators is symbolic of its broader rejection of essential human rights reforms. Until that stance changes it is impossible to have meaningful impact on the domestic crisis and the massive exodus of Eritreans provoked by the dire human rights situation.” 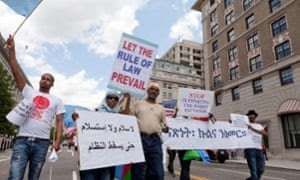