The Guardian view on Eritrea: a regime of terror | Editorial | Comment is free | The Guardian 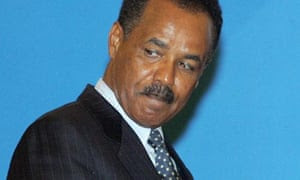 Europe’s response to the migrant crisis in the Mediterranean has rightly – if belatedly – focused on saving lives. Not a week goes by now without thousands of Africans, Asians and refugees from the Middle East being rescued off the coast of Italy by European ships. That is the welcome result of a humanitarian effort decided in late April, after a series of tragedies at sea had pushed EU leaders to act at last. But it would be dangerous to suppose that the deeper problem has been addressed. Europe deals only with the symptoms of migration, not its root causes. Eritrea is a striking case in point.
This east African nation of 6 million people is now one of the biggest sources of migrants who take the perilous journey into Sudan and then across Libya before finally setting out to sea towards Europe’s shores. There is no civil war in Eritrea, nor has there been an international military intervention. What Eritreans desperately try to escape is a dictatorship that sounds close to being Africa’s equivalent of North Korea. The UN’s inquiry on human rights in Eritrea, in a damning report published earlier this week, found what it called “a pervasive control system used in absolute arbitrariness to keep the population in a state of permanent anxiety”. It describes torture, arbitrary detentions, enforced disappearances, indefinite military conscription, forced labour. It is a comprehensive description of how President Isaias Afwerki, in power for 23 years, rules through fear.
In the face of the systematic inhumanity of his regime, Europe has turned a blind eye. Even worse, the EU has in recent months decided on a new development aid package to Eritrea, worth over €300m. The argument is that financial support will help stem the flow of asylum seekers pouring out of the country. But it is not likely to work like that. Rather, the aid will first feed the cynicism of a dictatorial system only too happy to feel vindicated in its twisted assertion that Eritreans are migrating for predominantly economic reasons, not political ones. Second, such a policy does nothing to relieve those who so desperately need urgent help. Europe is not only compromising its own values by turning a blind eye to tyranny, it is rewarding a regime with aid instead of thinking strategically.
Any reading of the UN report should tear down this convenient myth. The EU must base its action not on wishful thinking but on the report’s core conclusion, which is that crimes against humanity may be being committed in Eritrea. This means that European governments, including the UK’s, that have tried to cast Eritreans as economic migrants, must seriously consider changing course. If Eritreans are fleeing persecution, Europe’s obligation is to be open to them, not to retreat behind false representations. If aid is to be delivered, it must come with strict obligations attached. There may be no easy solution to Eritrea’s domestic situation, but the very least one should expect from Europe is to recognise the facts: it is a totalitarian state whose refugees are not, or not only, in search of work but who are fleeing a very real terror.
Posted by Guihon at 2:54 AM