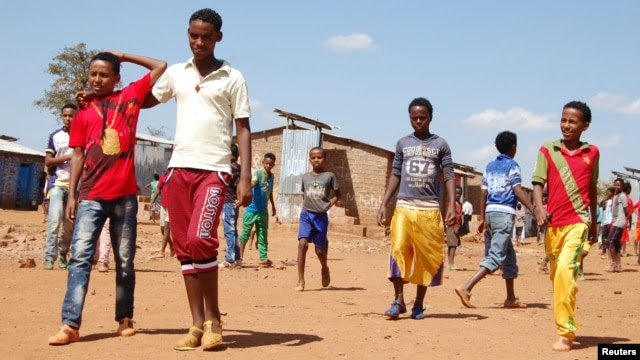 David Arnold
For many years Europe has welcomed refugees from Eritrea - a nation that has acquired a reputation among western powers as a totalitarian state - a hermit nation on the Horn of Africa.
But even after yet another United Nations charge of human right violations by Eritrea’s leaders, a high government official in the nation’s capital, Asmara, says a few European countries may be rethinking their blanket amnesties.
There may be several reasons why European Union immigration officials are re-assessing blanket asylum approvals for Eritreans. They may want to stop or reduce further Eritrean entries and  to stop other migrants who falsely claim Eritrean nationality to receive asylum.

Or, EU officials may think Eritrea is shedding some of its domestic policies, policies they believe lead to past abuse human rights abuse.
The UN refugee agency says youth conscription intensified last year, but the political advisor to President Isaias Afewerki says the E-U is sending officials to Eritrea to see if their justification for that asylum policy is based on facts on the ground.
Why are EU immigration officials visiting Asmara?
“Several European countries sent their immigration departments to come and look at the situation for themselves sin Eritrea,” Yemane Gebreab told the Voice of America recently. “The British have been here, the Danes have been here, and the Norwegians have been here several times, the Dutch have been here, the Swedes are here right now, and officials from Switzerland have been here.

“So, key European countries have sent their people to look at the situation on the ground,” Yemane says. “And I think that they have come to the realization that what is being said about Eritrea is not true, that there is no political persecution in this country, that national service is not indefinite, that it does not constitute slave labor.
“Those who are traveling to Europe are traveling there essentially for economic reasons,” Yemane argues.
Are they all really Eritreans?
Economic refugees from other African countries lie about their nationality to get fast-track approval of asylum. Yemane says many Ethiopian migrants falsely claim Eritrean citizenship to gain automatic asylum.
But the Ethiopian government has its own refugee problems to solve. Security officials in Addis Ababa have arrested 200 Ethiopians on charges of smuggling. They asked INTERPOL – the International Criminal Police Organization - to help extradite 80 more for prosecution in Ethiopian courts.
Yemane says some migrants bound for European asylum are imposters. “People in this neighborhood - Ethiopians, Sudanese, Somalis and others have claimed they are Eritrean to expedite their asylum procedures.
“As far as minors are concerned the same thing goes. You look at Ethiopia. Ethiopians are now at the heart of the human trafficking network. There are a lot of people in northern Ethiopia, minors who are going to Europe posing as Eritreans.”
Blaming conscription on a war economy
The Eritrean government’s view of its own recent history is that of a small country forced to become a war economy when they fought a two-year border war with Ethiopia. The war cost an estimated 100,000 lives and justified national service for anyone 18 or older.  Some refugees report that service lasted for many years and became the instrument of punishment for critics of the state. Some have also charged that those who serve their country become forced labor in Eritrean gold mines operated by foreign firms.
However, Yemane says current government policy requires that the 17 mining companies operating in Eritrea cannot hire an Eritrean unless he or she has a document proving they have been released from national service.
Besides, Yemane says, national service is not just a standing army.
Teachers and nurses also serve
“National service doesn’t mean only people serving in the military. It means people swerving mainly in the civilian sectors. So as you go to our schools, our teachers – probably around 60 percent – are national service members. They fulfill their national service obligation in our educational system, teaching. If you go to our health system, our hospitals and clinics and health centers, again a significant percentage are national service members. If you look at our agriculture, the people who are providing extension services to farmers and giving them advice are national service people.”
An African affairs researcher who recently traveled to Asmara spoke with Mr. Isaias and others in the Asmara government. She described a “charm offensive” of officials looking to rid themselves of their old image.
Yemane says post-war Eritrea will be different.
Predicting a five-year economic transformation
“War and its pain are restrictions on the society and the economy because they, in a sense, take a priority at that time,” Yemane says. “Now, that phase is coming to an end. We are entering a new phase of growth and we believe that in the next three to five years the Eritrean economy will see a significant transformation.
“We believe that in three to five years we will be able to provide job opportunities for our young people.  We are getting more and more confident in the development prospects in Eritrea and that is leading to this change.”
For the sake of economic development, the Eritrean government now considers whether to give up its war economy and the longtime practice of jailing its dissenters and its journalists. Meanwhile, the leaders of the European Union struggle with the summer’s massive flow of migrants and whether to still welcome future Eritreans who claim political asylum.
Part 3 of a series on the risks of the dangerous trail to Europe, why Eritreans are leaving home and whether policies in Europe and Eritrea are changing.
Posted by Guihon at 9:05 AM