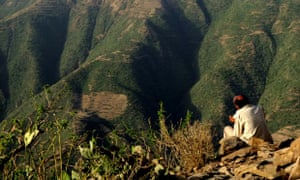 44
Save for later
In the spring of 1976, two young Eritrean men walked into the glass-fronted United Nations building in downtown Geneva to make a desperate plea.
It was years into Eritrea’s struggle to break away from neighbouring Ethiopia, and occupying troops had recently shuttered schools across the country. With no outside help forthcoming, Habte Tesfamariam and Yusuf Berhanu, both fresh-faced university graduates, saw the UN refugee agency as a last resort.
“We explained to them the terrible situation concerning children in Eritrea and asked if they could help us to build a school in the liberated areas. They refused, saying that Eritrea wasn’t recognised by the UN,” said Tesfamariam, who was at the time a member of the independence fighters known as the Eritrean Liberation Front (ELF).
When the two men persisted, officials eventually agreed to help set up a school in neighbouring Sudan, where thousands of refugees were camped at the time.

Their efforts encapsulate the fierce self-reliance – and sense of betrayal toward the international community – that held Eritrea together during its 30-year struggle for independence, and is arguably still strongly present today.
Around 6,000 students passed through the school they helped set up in Kassala, in eastern Sudan, many of whom went on to study abroad. “After the liberation of Eritrea, I was expecting them to return back and develop the country,” said Tesfamariam.
Instead, independence triggered a slow bleeding of the population. For a generation of opposition activists like Tesfamariam, who turned 70 this year, it marked the beginning of a period of exile from which few have returned.
The pressure of three decades of war prompted the ELF to splinter and from it emerged the Eritrean People’s Liberation Front, whose tanks finally rolled to victory in the capital, Asmara, in 1991, after three decades of conflict. At their head was Isaias Afwerki, a charismatic, sandal-wearing soldier who idolised Marx, and who quickly turned on the other organisations that had fought for independence alongside him.
“We were demonstrating, having strikes, everything we could do in the face of a very punishing Ethiopian response. We thought that after independence there would be real democracy, but today it is absolutely impossible to return to Eritrea as an opposition member. If you do, they will pick you up upon arrival and you will disappear,” said Tesfamariam.
“It is the worst kind of dictatorship – it’s run as if it’s bandit country.”
For almost a quarter of a century, Eritrea has remained under the iron grip of Afwerki, its population of 6 million getting by with no constitution, no independent judiciary or media, and no opposition parties. Isolated and paranoid, Afwerki has declared the population is “not ready” for multi-party democracy.

State repression coupled with very few jobs and indefinite national service made this tiny nation the third biggest source of migrants arriving on Europe’s shores last year. The UN believes up to 5,000 flee monthly, although some warn numbers may be inflated by others pretending to be Eritrean to boost their chances of gaining asylum.
Now though, the Horn of Africa nation appears to have launched a charm offensive as efforts to stem the flow of those fleeing coincide with Europe’s own struggle with the biggest refugee crisis since the second world war.

Senior Eritrean officials say those who flee the country are economic migrants, not refugees, but have nevertheless talked about scaling back indefinite national service, mentioned by many refugees as a main reason for fleeing the country.
A report by the Danish government this year claimed that, for the first time, draft evaders are unlikely to face punishment on returning home, providing they sign a “letter of apology”. The report was a response to apparent overtures by Afwerki’s regime to lure back its much depleted generation of young people, needed to help rebuild its war-shattered economy. 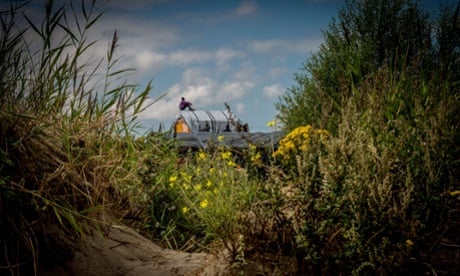 What you need to know about Eritrea – the Guardian briefing

There’s a grim running joke among exiled politicians that Afwerki controls both the government and opposition, as both sides are forced to dance to his tune, prompting the nickname “Africa’s North Korea”.
While there is little sign of the personality cult that defines everyday life in North Korea, a similar intolerance of public dissent prevails. Despite a middle class who are able to live peaceful lives, the political landscape is bleak.
Initially seen as a war hero who negotiated aid deals to uplift a crippled economy, Afwerki soon revealed an authoritarian streak. In 1993, two years after the conflict ended, he ordered the imprisonment of veterans protesting against harsh conscription conditions. Shortly after, all but a handful of state-sanctioned international development organisations were closed down.
But rumours of dissent at the highest level began to filter out. Years of increasing tension culminated in an open letter from around a dozen senior ranking officials in September 2001. With the world fixed on the 9/11 attacks in the US, Afwerki quietly rounded up 11 of the signees. They have been held incommunicado ever since. Independent journalists and writers were also carted away to undisclosed locations in the country that languishes at the bottom of media freedom rankings. Richard Reid, an academic who visited around the time of the arrests, recalled the capital’s once-sparkling nightlife suddenly dampened by a cloak of suspicion.

So how does an opposition operate in such circumstances? Tesfamariam, who is of the same generation of fighters as Afwerki, believes meaningful change is impossible so long as the president is in power. “Everyone in the civilian population understands this now. We have now managed to start an underground movement inside the country,” said Tesfamariam, who chairs theEritrean National Congress, an umbrella group of 10 other opposition groups also forced to operate from outside the country.
Tesfamariam, whose decades-long career as an independence fighter began with him delivering secret mail between members, said momentum was slowly growing inside Asmara, despite the risks.

Even if there are some things that need to change, it has to be done the Eritrean way

Critics of Afwerki say he uses the apparently continued existential threat from Ethiopia to rollback democratic change. “Ethiopia in a way cooperates because they don’t want him causing trouble by supporting opposition groups in the region. It’s a stalemate nobody seems willing or able to break,” said Dan Connell, who has chronicled Eritrean history for 40 years and regularly visits its border towns, referring to claims, strongly denied, that Asmara supports Somali islamist group al-Shabaab and its incursions into Ethiopia.
A generational rupture means many still view Afwerki as a national hero, even if they hoped for more prosperity by now. Solomon Abraha, a 70-year-old birdwatcher who runs tourism trips into the country, often joins veterans to sip coffee in the city squares and is dismissive of international pressure helping after so many decades. “It’s a free country – I can come and go as I please. Eritrean eyes see the situation most clearly. 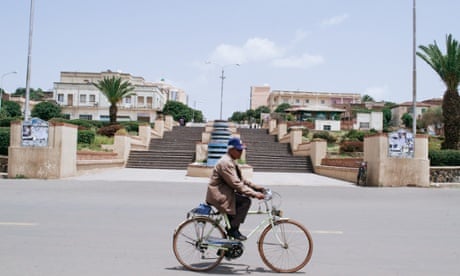 “Even if there are some things that need to change, it has to be done the Eritrean way.”
Although a strong sense of nationalism means Eritrea is unlikely to witness the implosions of regional neighbours like Somalia and Libya, the path ahead is likely to be rocky.
“If we’re talking about a western approach to democracy, it’s going to be very difficult to reach that stage because these are organisations that have been continuously under armed struggle. The [institutional] capacity is very weak, but there is no other way but forward,” Tesfamariam said.
Posted by Guihon at 8:01 AM