A plane holding refugees from Eritrea has left Italy, part of a plan to help countries hard hit by the migrant crisis. One Italian leader has called the move an important next step in changing Europe's migration policy. 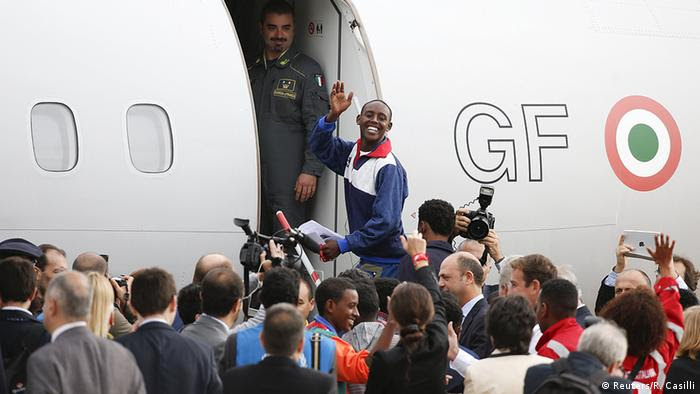 The plane, carrying 19 refugees from the troubled African nation, left Rome's Ciampino airport for Sweden on Friday, the first phase of the European Union's new resettlement program meant to alleviate the burden faced by countries overwhelmed by the influx of migrants. The plane was bound for Kallax airport in the north of Sweden.
The young Eritreans' departure was also designed as something of a spectacle for the press, with Italian Interior Minister Angelino Alfano making an appearance and shaking the refugees' hands before the cameras. He told reporters this served as proof the EU was altering its migrant policy. He said flights to Germany, the Netherlands and other countries would begin in the coming weeks.
The EU announced plans to redistribute refugees in September, with plans to relocate around 160,000 people within the next two years. The EU's migration commisioner, Dimitris Avramopoulos, called for all member states to show solidarity in the face of the crisis.
EU leaders have faced a historic challenge with the rising number of refugees arriving from impoverished and war-torn countries in the Middle East, Africa and elsewhere. Economically weaker eurozone countries in the south, such as Greece and Italy, face particular strains.
blc/msh (AFP, AP, dpa, Reuters)

The European Union's interior ministers have agreed on a plan to distribute 120,000 people between the bloc's member states. The agreement comes despite protest from several eastern European countries. (22.09.2015)

EU interior ministers have discussed new laws to send back illegal migrants who do not qualify for asylum. The countries say their initiative is part of efforts to accommodate refugees who genuinely need help. (08.10.2015)

Chancellor Angela Merkel has ruled out any freeze on migrants entering Germany, claiming that it would be impractical. In a television interview, the chancellor said she was "convinced" that the country would cope. (07.10.2015)
Posted by Guihon at 1:16 AM