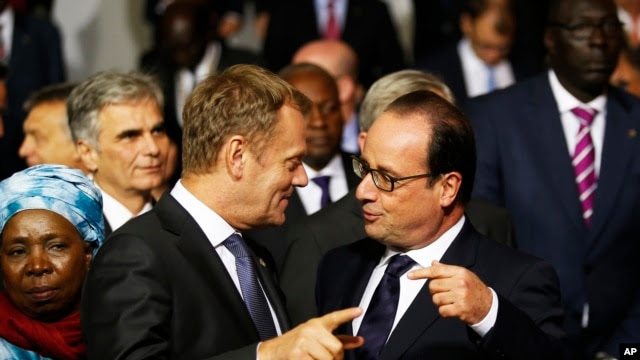 VOA News
French President Francois Hollande says Africa needs more international development aid in order to curb the flow of migrants from African countries.
Speaking at a meeting of more than 60 leaders from both Africa and the European Union, Hollande said that unless the EU delivers in terms of aid, the migration crisis that has sent hundreds of thousands of people fleeing to Europe this year will continue.
Hollande noted that a lot of the migrants are from Eritrea and Sudan. He said that in the case of Eritrea "maximum pressure" has to be applied to the country's leaders to mend a serious situation. "Nobody is talking about it.  It is a country that is becoming empty of its own population with unscrupulous leaders who let their people go."
The EU summit Wednesday and Thursday in Valletta, Malta, is focusing on addressing the reasons why people are leaving their home countries, better organizing legal migration channels, boosting protections for migrants, battling smugglers and improving cooperation with African nations on returning people who do not qualify for asylum.
Belgian Prime Minister Charles Michel called for firm commitments beyond political declarations.
"We believe we must both combat illegal immigration, combat traffickers, we believe we must also progress in the field of return and readmission policies. In exchange, the European countries must be mobilized for more economic development support, humanitarian support, and also more support to allow for, as an example, exchanges of students to enable the exchange of researchers, which is also important for the future," said Michel.
Meanwhile, Sweden says it will introduce temporary border controls to stem the flow of migrants.
Swedish Interior Minister Anders Ygeman said the border controls will begin on Thursday.
Sweden is struggling to absorb tens of thousands of refugees. 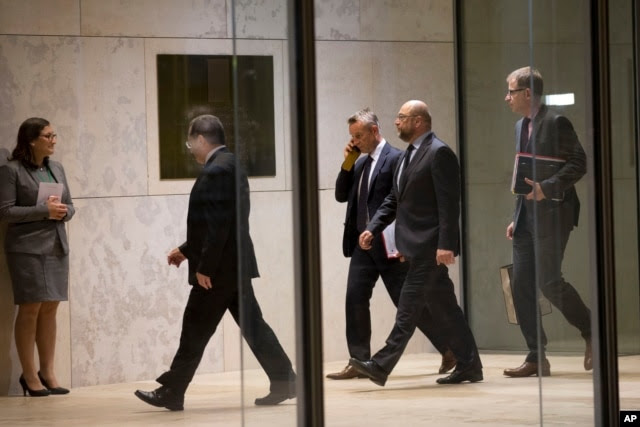 President of the European Parliament Martin Schultz, second from right, arrives at the Maltese parliament to delivers a speech on the occasion of a migration summit in Valletta, Malta, Tuesday, Nov. 10, 2015.
EU member Slovenia began building a barbed wire fence on its border with Croatia Wednesday, which prompted a meeting of negotiators from both countries, since, according to Croatians, the fence passes through its territory.  Slovenian Prime Minister Miro Cerar, however, said the country is not closing its borders and that what he called "obstacles" were being put in place in order to direct migrants toward border crossings.
As part of the effort, Europe is offering $1.8 billion in new aid to African countries.  But critics are questioning Europe's response, saying the EU is trying to push people back to areas where there are serious questions about human rights and a lack of economic opportunities.
About 800,000 people have crossed into Europe by sea this year, nearly four times the number in 2014, according to the International Organization for Migration.  Italy and Greece are the most popular landing points.  More people have landed in Italy from Eritrea, Nigeria, Somalia and Sudan than anywhere else, making up half of the 140,000 migrants who have arrived there this year.
More than 3,400 people have died making dangerous sea crossings to Europe this year.  At least 14 people drowned Wednesday after a boat sank on a trip from northern Turkey to Greece.
The EU's Malta-based European Asylum Support Office released data showing a backlog of 800,000 applications for international protection through September.
It also said almost one in three migrants has been waiting at least three months for applications to be processed, and said 200,000 applicants have been waiting six months or longer.
Posted by Guihon at 1:25 AM