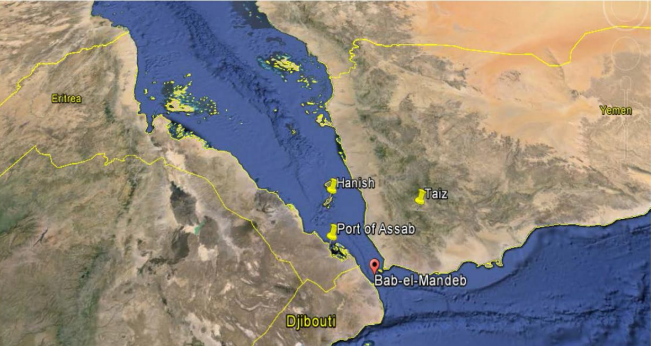 Bab al-Mandab strait separates the Arabian Peninsula from the Horn of Africa and links the Red Sea to the Gulf of Aden and the Indian Ocean (credit: UN SEMG)
Nov. 2, 2015 – The United Arab Emirates has leased a key Eritrean port for 30 years and along with its Gulf ally, Saudi Arabia, has established a military presence in Eritrea in return for monetary compensation and fuel supplies.
United Nations investigators have also received reports that 400 Eritrean troops are embedded with UAE forces battling Houthi rebels in Yemen. If confirmed, this would violate UN Security Council sanctions imposed against Eritrea.
The information is contained in the latest report of the UN Group of Experts monitoring sanctions against Somalia and Eritrea. They state that the military arrangement between the Gulf coalition and Eritrea was likely established in March or April this year.
The report says the Gulf alliance’s arrangement with Eritrea, which is located across the Red Sea from Yemen and at its narrowest point is just 29 kilometers from Yemen, came about after Djibouti rebuffed an approach by Saudi and UAE to use its soil in their military campaign against Houthi expansion in Yemen.

Saudi Arabia’s King Salman hosted Eritrea’s President Isaias Afwerki on April 28, 2015 (credit: Saudi Press Agency)
As part of the arrangement, Eritrea has allowed the Gulf alliance to use the Hanish islands and has leased the Port of Assab to the UAE for 30 years. The group of experts write that “Eritrea’s making available to third countries its land, territorial waters and airspace to conduct military operations in another country does not in and of itself constitute a violation of resolution 1907 (2009)” but “any compensation diverted directly or indirectly towards activities that threaten peace and security in the region or for the benefit of the Eritrean military would constitute a violation of” the resolution.
“Moreover, if the credible claims received by the Monitoring Group that Eritrean soldiers are indeed participating in the war effort under the leadership of the Arab coalition were confirmed, it would constitute a clear violation of resolution 1907 (2009),” the report states.
Saudi Arabia and the UAE are not the only two Gulf countries with a military presence in Eritrea. Qatar has 200 troops located on the country’s border with Djibouti. Doha is involved in mediating disputes between the two countries.
For its part, the Government of Eritrea has called on the Security Council to lift the arms embargo against it saying Eritrea’s strategic location makes it a target for extremists.
- Denis Fitzgerald
@denisfitz
Related Documents:
Report of the Monitoring Group on Somalia and Eritrea, October 2015
Security Council Resolution 1907 (2009)
Related Stories:
A Ceasefire or Humanitarian Pause: What’s Happening in Yemen?
UN Yemen Appeal Only 15 percent Funded
Yemen’s Saleh Worth $60 Billion Says UN Sanctions Committee
Posted by Guihon at 12:45 AM