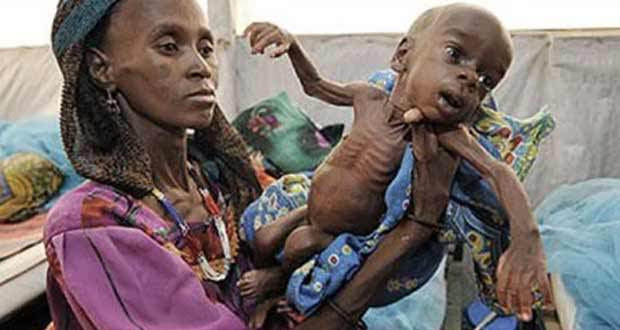 As famine stalks millions of Ethiopians, and aid ships wait forever to unload at Ethiopia’s port of Djibouti, offers of free use of Eritrea’s Red Sea ports fall on deaf ears in Addis Ababa.
Millions upon millions have now exhausted their food stocks and major starvation has begun.
Desperate for food aid to be unloaded, aid agencies are begging the Djibouti port authorities to work faster, but the port of Djibouti is small and creaky and completely unable to keep up with the desperate need.
Enter Eritrea, home to not one but two ports on the Red Sea, with the southern and larger of the two, Assab, having been given a major upgrade by the Emirates this past year.
All backlog of food aid would be cleared up quickly if Ethiopia will only use the Eritrean ports, an offer repeatedly made in the past during droughts to no avail.
The question has to be asked, what kind of government sits back and allows tens if not hundreds of thousands of its own people to die of starvation because of some political dispute with its neighbor?
Only Ethiopia is allowed to get away with deliberately starving its own citizens, for there is supposed to be enough food aid in the pipeline to prevent the worst of the famine and only the shortage of port facilities in Djibouti is preventing its distribution.
Why isn't the USA and its lickspittles in the EU pressuring the Ethiopians, who are supposed to be under UN Article 7 Sanctions for their refusal to accept final and binding peace and border agreements, and entirely dependent on foreign loans to keep running ($11 billion in 2015)?
The politics of famine is what its all about as death from starvation stalks Ethiopia, again.
Thomas C. Mountain is an independent journalist living and reporting from Eritrea since 2006. He can be reached on Facebook at thomascmountain, on twitter @thomascmountain or thomascmountain at gmail dot com
Posted by Guihon at 2:25 AM